UNHCR/D. Mbaiorem
The ruins of a house that was torched by LRA fighters in Nguili-Nguili village, close to Obo Town, Central African Republic.

29 May 2013
Concerned that lingering instability in the Central Africa Republic (CAR) following a power grab by rebels has stalled operations to neutralize the Lord’s Resistance Army (LRA), the Security Council today urged regional actors to cooperate on all fronts to tackle the dual crises.

“The Council expresses concern at the recent pause of counter-LRA operations in CAR in the context of the current crisis in the country due to the seizure of power by force on 24 March 2013 by the Séléka coalition,” said the 15-nation body in a statement adopted following a briefing by Abou Moussa, the Secretary-General’s Special Representative and head of the UN Regional Office for Central Africa (UNOCA).

Also expressing concern about the ensuing violence and looting, in the wake of the Séléka takeover, which worsened the humanitarian and security situation and weakened the institutions of the CAR, the Council recognized the need “in the short term” for the transitional authorities of CAR, the Economic Community of Central African States (ECCAS), the African Union and the UN to strengthen their coordination to solve the current crisis in CAR as soon as possible.

As for the LRA, the Council in its statement reiterated strong condemnation of the attacks and atrocities carried out by the group, demanded an immediate end to them, and urged the LRA “to release all those abducted, disarm and demobilize.”

The LRA was formed in the 1980s in Uganda and for over 15 years its attacks were mainly directed against Ugandan civilians and security forces, which in 2002 dislodged the rebels. They then exported their activities to Uganda’s neighbours, such as the Democratic Republic of the Congo (DRC), the CAR and South Sudan.

The group is notorious for carrying out massacres in villages, mutilating its victims and abducting boys for use as child soldiers, while girls are often forced into sexual slavery.

The Council encouraged the UN, AU and ECCAS, to work together to develop “a common operating picture” of the LRA’s current capabilities and areas of activity, as well as to investigate the group’s logistical networks and possible sources of military support and illicit financing, including alleged involvement in elephant poaching and related illicit smuggling.

Further to its statement, the Council welcomed the development of the implementation plan for the UN Regional Strategy to Address the Threat and Impact of the Activities of the LRA and urged UNOCA, as well as the UN political and peacekeeping missions in the region, “to enhance their efforts in support of the implementation of the strategy.”

In his briefing, Mr. Moussa told the Council that implementing the Strategy will require additional resources. “We therefore count on the continued political goodwill and financial commitment of all stakeholders, particularly the LRA-affected countries and the major partners, to translate these plans into reality.”

UNOCA is the world body’s regional office charged – along with the AU envoy on the issue, Francisco Madeira – with helping coordinate a regional strategy to deal with the armed group, amongst its other tasks.

The UN Strategy was endorsed by the Council in June, and in December, the 15-nation body asked UNOCA to work with the AU and other partners to develop a prioritized implementation plan for the strategy.

The strategy focuses on five key objectives to address the LRA threat: support for the full operationalization and implementation of the AU regional initiative against the LRA; enhancing efforts to promote civilian protection; and expanding current disarmament, demobilization, repatriation, resettlement and reintegration activities to cover all LRA-affected areas.

The other objectives are to promote a coordinated humanitarian and child protection response in these areas, and to support LRA-affected Governments in the fields of peacebuilding, human rights, rule of law and development, to enable them to establish State authority across their territories.

Mr. Moussa said that now that the implementation plan has been finalized, the next immediate priority is “to organize a resource mobilization forum in support for the implementation of the strategy in partnership with the African Union.”

He also noted that the AU Regional Task Force is currently facing various challenges, including logistical obstacles that confine troops to their respective bases and prevent them from initiating military operations.

“These challenges are further compounded by the current political and security crisis in the CAR,” Mr. Moussa said, adding that the situation in the country is having a direct impact on the operations of the regional task force there.

In spite of the situation, he was encouraged by the readiness of the CAR authorities to cooperate with the international community to pursue the fight against the LRA.

He also highlighted major security concerns in the Central African region, including the ongoing military operations by the Nigerian armed forces against Boko Haram insurgents.

“The potential humanitarian consequences and cross-border impact of Nigeria’s military offensive for the countries of the sub-region are yet to be fully stressed,” he said, adding that thousands of people have already fled the military offensive into neighbouring Cameroon and Chad.

He also drew attention to the issue of poaching in the region, where over the past five months there have been alarming reports of poachers killing elephants inside the World Heritage Site of Dzanga Bai in the CAR. 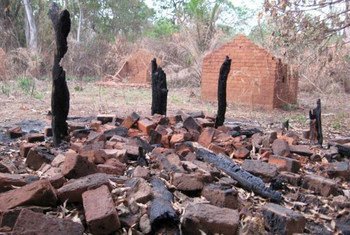