29 May 2013
The United Nations Human Rights Council today called for an immediate end to the fighting in Syria as well as for an independent inquiry into the events in Qusayr, where the violence has recently intensified, while condemning the involvement of foreign fighters in the conflict.

Intense shelling and clashes between Government forces and supporting militias and anti-Government armed groups have reportedly resulted in hundreds of civilian deaths and injuries in and around Qusayr, a town near the Lebanese border. Hundreds of families are said to have fled the area over the last month as efforts to capture the town have intensified.

During an urgent debate held today in Geneva, the 47-member Council adopted a resolution in which it called on the Syria authorities “to meet their responsibility to protect the Syrian population and to put an immediate end to all attacks against the civilians of Al Qusayr.”

The text, adopted by a vote of 36 in favour to 1 against (Venezuela) with 8 abstentions, also condemned the intervention of foreign combatants fighting on behalf of the Syrian regime in Qusayr, and voiced deep concern that their involvement poses a “serious threat” to regional stability.

Addressing the Council prior to the adoption of the measure, UN High Commissioner for Human Rights Navi Pillay said that the situation in Syria reflects a “colossal failure” to protect civilians.

“Day after day, children, women and men suffer the brutality of unbridled violence and gross human rights violations by all parties,” she stated. “The increasing number of foreign fighters crossing Syria’s borders to support one side or the other is further fuelling the sectarian violence, and the situation is beginning to show worrying signs of destabilizing the region as a whole.”

Since March 2011, fighting between the Syrian Government and opposition forces seeking to oust President Bashar Al-Assad has killed more than 70,000 people, and left 6.8 million people in need. In addition, the UN estimates that some 1.5 million Syrians have fled their country to escape conflict.

“The conflict in Syria is spinning out of control,” warned Ms. Pillay, who called for immediate action to stop further bloodshed and suffering. “The solution must be political. It will not be military,” she added.

In the run-up to the proposed international conference on Syria to be held next month in Geneva, Ms. Pillay called on “States with influence to pull the parties back from the brink of catastrophe.”

Speaking to reporters in New York, Secretary-General Ban Ki-moon said that “active talks” are under way regarding the proposed Geneva conference. However, there are still many decisions that need to be made, including agreement on a date for the meeting, as well as agreement among the opposition as to their representation.

While he was not in a position to announce when the meeting will take place, Mr. Ban declared: “we are committed to [convening] it.”

Regarding reports that the Lebanese group Hizbollah had stepped up its activities in Syria, he said that the UN is very much concerned that other actors have entered the fighting. He strongly urged all fighting to stop immediately so that a political process could begin.

Mr. Ban said he had been urging all parties with influence – on both sides – to call for an end to the fighting.

“Providing arms to either side will not help: there is no military solution [and] the only sustainable resolution will be through political means,” he said, adding that he had “taken note” of the European Union’s decision to lift its arms embargo in Syria.

Mr. Ban also reiterated his call for a political solution in a message to the consultative meeting on Syria that was held today in Tehran. “Syria is disintegrating before our eyes. The chaos is creating fertile ground for radicalism and increasingly threatens regional stability,” he said in the message, which was delivered by the UN Resident Coordinator in Iran, Gary Lewis.

Mr. Ban noted the efforts by Russian Foreign Minister Sergey Lavrov and United States Secretary of State John Kerry to bring the Syrian parties to the negotiating table. “These talks are the best opportunity we have had in nearly a year for a negotiated solution. The challenges ahead are formidable but we cannot afford to miss this opportunity.”

Libya: UN calls for active participation of women in drafting of new constitution 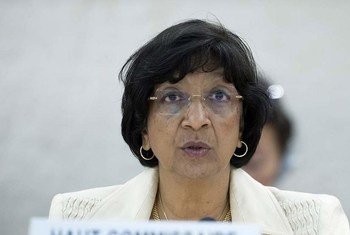 27 May 2013
The United Nations human rights chief today urged the international community to stop the escalating bloodshed and suffering in Syria, stressing it has become “an intolerable affront to the human conscience.”