26 May 2013
The Security Council today underlined the need to bring the perpetrators of the attack on a compound of the International Organization for Migration (IOM) to justice, and expressed serious concern over the threat that terrorist groups pose to the country.

The attack, which was condemned by Secretary-General Ban Ki-moon on Friday, occurred in central Kabul and wounded three of the IOM's staff, one seriously, as well as staff member from the UN International Labour Organization (ILO). The Taliban claimed responsibility for the attack, alleging that its target was a “military rest house.”

“The members of the Security Council reiterated their serious concern at the threats posed by the Taliban, Al-Qaida and illegal armed groups to the local population, national security forces, international military and international assistance efforts in Afghanistan,” said a statement issued to the press by the 15-member body.

Council members expressed their deep sympathy and condolences to the families of the victims and to the people and Government of Afghanistan, and stressed the need to bring perpetrators, organizers, financiers and sponsors of these acts of terrorism to justice.

The Council also urged all States, in accordance with their obligations under international law and relevant Security Council resolutions, to cooperate actively with the Afghan authorities in this regard.

Council members also reaffirmed that terrorism in al its forms and manifestations is criminal and unjustifiable, and added that “no terrorist act can reverse the path towards Afghan-led peace, democracy and stability.”

In addition, the Council commended the Afghan National Security Forces and UN security personnel for their effective action, and reiterated their support for the role of the UN and UN-affiliated organizations in Afghanistan.

“I want to thank the Afghan National Police, without whom we would have had a far more serious incident,” Mr. Danziger said. “IOM has been working in Afghanistan since 1990 and I think people know the important work we do and we will not let this incident affect us.”

Mr. Danziger said his organization remains undeterred and would be back at work tomorrow.

“I'm absolutely mystified as to why we would have been the target of this attack,” he said. “It is clear that international staff were the primary targets. The extent of the damage is considerable and it is unlikely that we will move back there.” 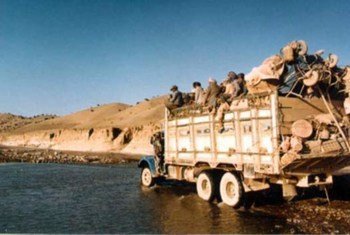 24 May 2013
Secretary-General Ban Ki-moon and the top United Nations envoy in Afghanistan have strongly condemned the terrorist attack on a compound of the International Organization for Migration (IOM) in central Kabul, which earlier today wounded three of the agency’s staff, one seriously.