An independent United Nations human rights expert has welcomed what he said was a ground-breaking speech by President Barack Obama in which the United States leader laid out principles governing the use of counter-terrorism measures such as targeted killings.

Mr. Obama said yesterday that, as part of a realignment of US counter-terrorism policy, he would curtail the use of drones, recommit to closing the prison at Guantánamo Bay, Cuba, and seek new limits on his own war power.

The new policy guidance imposes tougher standards for when drone strikes can be authorized, limiting them to targets that pose “a continuing, imminent threat to Americans” and cannot feasibly be captured, according to media reports.

“This extremely important speech breaks new ground in a number of key respects,” the UN Special Rapporteur on human rights and counter-terrorism, Ben Emmerson, said in a news release.

“It affirms for the first time this Administration’s commitment to seek an end to its armed conflict with Al-Qaida as soon as possible; it reminds the world that not every terrorist threat or terrorist attack can be equated with a situation of continuing armed conflict; and it sets out more clearly and more authoritatively than ever before the Administration’s legal justifications for targeted killing, and the constraints that it operates under,” he said.

The speech also clarifies, and proposes improvements to, the procedures for independent oversight; and it sets out the steps the President is now resolved to take in order to close Guantánamo Bay, he added.

Mr. Emmerson said that the publication of the procedural guidelines for the use of force in counter-terrorism operations is “a significant step towards increased transparency and accountability. It also disposes of a number of myths, including the suggestion that the US is entitled to regard all military-aged males as combatants, and therefore as legitimate targets.”

He added that he will be engaging with senior US officials in Washington D.C. over the coming days and weeks in an effort “to put some flesh on the bones of the announcements made.”

The expert said that Mr. Obama’s acknowledgement that the time has come to tackle not only the manifestations of terrorism but also its social, economic and political causes around the world “signals a shift in rhetoric and a move in policy emphasis towards promoting a strategy of sustainable and ethical counter-terrorism.”

Independent experts, or special rapporteurs, are appointed by the UN Human Rights Council to examine and report back on a country situation or a specific human rights theme. They work in an unpaid capacity.

The attacks on the US five years ago were against ‘humanity itself’: Annan 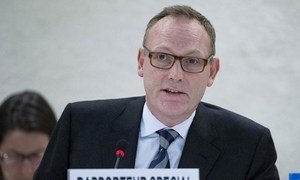 The United States' ongoing drone campaign in Pakistan is a violation of the South Asian nation's sovereignty, as it is being conducted without the consent of its elected representatives or that of the legitimate Government, a United Nations independent expert has warned.