24 May 2013
Secretary-General Ban Ki-moon today thanked the Government of Uganda for its contribution to peace and security in Africa, travelling alongside World Bank President Jim Yong Kim on a first-of-its-kind visit to support a recent peace accord and promote economic development in the Great Lakes region.

Mr. Ban also singled out the “noble sacrifices” of many Ugandan soldiers who are contributing to UN peacekeeping operations, particularly the joint operation with the African Union (AU) in Somalia, known as AMISOM.

“People in Somalia are now able to enjoy the stability, the political stability, and opportunity, chances for development. I count on your continuing support and contribution on this matter,” the Secretary-General said in a press conference in the capital, Entebbe.

Earlier in the day, Mr. Ban spoke at a joint press conference with Mr. Kim in Kigali, Rwanda, about the message of hope they are bringing to the region. “The people of the Great Lakes have endured too much suffering for too long… We are determined to support lasting peace and rapid development,” he said.

He stressed that “there can be no peace without development” such as education, health care, roads and electricity, as well as human rights and good governance, “and no development without peace.”

Mr. Ban praised Rwanda’s progress in the past two decades but stressed that lasting peace needs the benefits of development to ripple throughout the region.

The joint visit to the region by Mr. Ban and Mr. Kim is symbolic of the international community’s support for the new peace deal. The World Bank Group had announced $1 billion in proposed new funding to help countries in the Great Lakes provide better health and education services, generate more cross-border trade, and fund hydroelectricity projects in support of the peace deal.

The UN-brokered Peace, Security and Cooperation Framework for the Democratic Republic of the Congo and the Region, which was signed in February by 11 African leaders including Rwanda and Uganda, aims to end the cycles of conflict and crisis in the eastern DRC – where, in the most recent hostilities, rebels from the 23 March Movement (M23) have been clashing with the DRC national armed forces (FARDC) – and to build peace in the wider region.

It is “the best chance for peace in many years,” Mr. Ban has said. “I am appealing to all leaders to play their part in implementing it and meeting their commitments.”

Mr. Ban and Rwandan President Paul Kagame are due to arrive on Sunday in Addis Ababa for the first of the regional oversight mechanism meetings. The meeting coincides with the 50th anniversary of the Organisation of African Unity (OAU), now the African Union.

While meeting with President Kagame last night, Mr. Ban presented him with the result of the Rwanda post-2015 consultations. He praised the country for being a “pioneer” in green economy and in helping to define the sustainable development priorities once the current Millennium Development Goals (MDGs) reach their target date of 2015.

He also commended the commitment of Mr. Kagame and his office for empowering women and girls, visible in a record 56 per cent of women in the Rwandan Parliament, “more than any other country.”

While in Kigali, Mr. Ban and Mr. Kim visited the One-Stop centre dealing with gender-based violence and laid the foundation for a new Centre for Excellence to help end violence against women and girls in conflict situations.

He and Mr. Kim also visited the Gisozi genocide memorial site, where they laid wreaths in solemn commemoration of the tragic 1994 event. Noting that it was his third visit to the site, Mr. Ban said that the memorial served as both a warning and a symbol of hope.

In addition, Mr. Ban will focus on African development next week when he attends the 5th Tokyo International Conference on the topic, known as TICAD V, in Yokohama, Japan.

He will also attend the award ceremony of the Second Hideyo Noguchi Africa Prize, which recognizes individuals or organisations which have made outstanding achievements in the fields of medical research and medical services to combat infectious and other diseases in Africa. 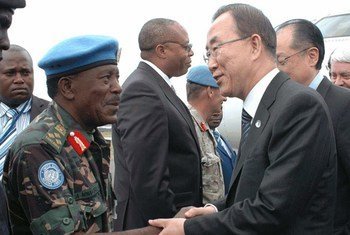 23 May 2013
Arriving today in restive eastern Democratic Republic of the Congo (DRC), United Nations Secretary-General Ban Ki-moon urged all the leaders of Africa’s Great Lakes region to throw their support behind a recently-signed peace accord which aims to ensure security, as well as development, for the long-troubled country.