21 May 2013
A senior United Nations humanitarian official reported today that the total number of people in need of assistance as a result of the ongoing conflict in Syria is now 8.3 million, representing about 38 per cent of the country’s population.

This figure includes some 6.8 million in need inside the country and 1.5 million who have sought refuge in neighbouring countries, Panos Moumtzis, Regional Coordinator for Syrian Refugees for the UN High Commissioner for Refugees (UNHCR).

“The situation in the neighbouring countries and movement of refugees across the border is obviously a direct consequence of the increased level of insecurity inside Syria, and in particular in areas of conflict,” he told a news conference in Geneva.

The needs have been growing rapidly in Syria, where over 70,000 civilians have lost their lives since the uprising seeking to oust President Bashar Al-Assad began in March 2011. The UN Office for the Coordination of Humanitarian Affairs (OCHA) has labelled the situation in Syria a “humanitarian catastrophe” and warned that funding for the response has not kept pace with the growing needs.

In January, more than $1.5 billion was pledged by donors for the humanitarian response to the Syrian crisis. Early next month, the UN and non-governmental organizations (NGOs) are due to announce a revised funding appeal in light of the growing needs.

Mr. Moumtzis said that the humanitarian situation in Syria has been “rapidly spiralling downwards” since the start of the year, and concerns are increasing with the onset of warmer weather in the region.

“UNHCR is now very much worried about the coming summer months and in particular the increase in temperatures and the associated health problems linked to water and sanitation,” he stated, adding that agencies are doing their best to ensure that there are no outbreaks of diseases.

Regarding the situation in the neighbouring countries, Mr. Moumtzis reported that there are now 500,000 Syrian refugees in Lebanon and 500,000 in Jordan.

“Such a significant number of refugees in a tiny country like Lebanon – with growing unemployment and insecurity, tremendous political pressure inside the country and the complexity of regional politics – made the Lebanese situation extremely dangerous,” he noted.

Meanwhile, the UN Children’s Fund (UNICEF) said today it is extremely concerned about the safety of civilians in the embattled Syrian city of Qusayr and fears that thousands of children and women could be trapped there by fighting.

Heavy clashes have been reported in Qusayr, a city near the Lebanese border, with a population of some 30,000, the agency said in a news release. Between 12,000 and 20,000 people, many of them children, are thought to still be inside the city.

“In recent days, hundreds of families have fled into Lebanon and various areas in Syria,” UNICEF spokesperson Marixie Mercado told reporters in Geneva. UNICEF, other UN agencies and partners are providing much needed humanitarian assistance including food, clothes and hygiene kits to many of those who have been displaced.

In Hasiaa close to Homs, UNICEF and partners are supporting some 500 families made up of women, children and elderly from Qusayr and nearby villages.

They are joining an additional 1,144 families who had previously fled Qusayr where fighting has flared over the past month.

Many of the families left at night with little or no possessions. Aside from providing clothing and hygiene kits, UNICEF and partners will also start trucking in critically needed water and working to improve sanitation in the coming days. 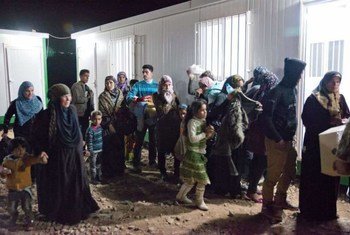 17 May 2013
The United Nations refugee agency announced today that the number of Syrian civilians who have fled their country to escape conflict has passed the 1.5 million mark, while warning that the widening gap between the needs and resources available is becoming a huge challenge.