21 May 2013
A United Nations forum dedicated to building resilience to disasters and making communities safer opened today in Geneva with expressions of sympathy for the people of Oklahoma City over the loss of life caused yesterday by a deadly tornado.

“Our thoughts and hearts go to the people of Oklahoma and we hope that help will reach those in need soon,” Deputy Secretary-General Jan Eliasson told participants at the opening of the 4th Global Platform for Disaster Risk Reduction, which is on the theme: “Invest Today for a Safer Tomorrow.”

The tornado, one of several over the past few days to hit various cities in the Midwestern United States, damaged schools and took many lives, including those of at least 20 school children.

Separately, Secretary-General Ban Ki-moon voiced his sadness at the news of the death and destruction in Oklahoma City as a result of Monday’s tornado, and sent his deepest condolences to those who have lost loved ones and to everyone affected by the storm.

Mr. Ban’s spokesperson said in a statement that the Secretary-General has written to the Governor of Oklahoma, Mary Fallin, to express his solidarity and to offer the UN’s assistance, if requested, to help with the recovery efforts.

“The impact of this disaster,” Mr. Eliasson noted in his remarks, “was evident for one of the world’s most economically developed countries. Think how much more dangerous the situation is in places where people are poor and living in fragile homes with insufficient water and health services.”

The Global Platform was established in 2007 as a biennial forum for information exchange, discussion of latest development and knowledge and partnership-building across sectors, with the goal to improve implementation of disaster risk reduction through better communication and coordination amongst stakeholders.

The forum is organized by UNISDR, the UN’s office for disaster risk reduction and secretariat of the International Strategy for Disaster Reduction. Some 4,800 participants have registered to attend this week’s event, including delegates from national and local governments, non-governmental organizations, civil society, the private and public sectors, international organizations, parliamentarians, scientists and academics.

The 2013 Global Platform will devote special attention to three critical areas: private sector investment in disaster risk management; the work of local communities, networks, and supporting policies in building resilience; and local and national efforts to implement the Hyogo Framework for Action, as well as on an action agenda for building disaster resilience in a post- 2015 successor agenda.

Mr. Eliasson said that building resilience to disasters and making communities safer is “our collective and shared responsibility,” adding that his visit to Japan earlier this year was a lesson on the urgency of reducing the risks for disasters.

In March 2011, Japan was struck by an earthquake and tsunami that killed more than 20,000 people in the eastern part of the country. The tsunami also slammed into the Fukushima Daiichi nuclear power station, located in Fukushima Prefecture, disabling cooling systems and leading to fuel meltdowns in three of the six units.

“Japan is leading a model of disaster risk reduction – but even in this advanced country, the deadly combination of multiple hazards was overwhelming and catastrophic,” said Mr. Eliasson.

He noted that the risks are higher in poor countries and for poor people, but the strategies are the same. “Everywhere on Earth, we reduce risks by identifying and addressing which factors drive the risks and what we can do about them.”

In this effort, the Deputy Secretary-General stated, the private sector is crucial, adding that how they utilize and invest their resources can mean the difference between life and death.

He added that disaster risk reduction is essential to reach the anti-poverty targets known as the Millennium Development Goals (MDGs), which world leaders have pledged to achieve by 2015.

“There can be no sustainable access to safe drinking water and basic sanitation if water sources and latrines are vulnerable to natural hazards. Hospitals and other community structures must be resilient. It is not acceptable that so many people die in disasters because of shoddy building standards. We have seen several such tragic disasters in recent times.”

He urged participants to build on the achievements of the Hyogo Framework – a global blueprint for disaster risk reduction efforts that was adopted by Governments in 2005 and aims to substantially reduce disaster losses by 2015. 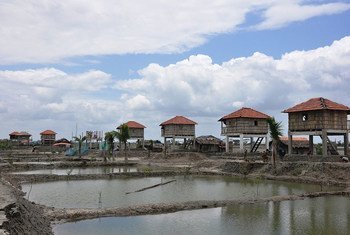 15 May 2013
The United Nations today warned that economic losses from disasters have spun out of control and called on the world’s business community to incorporate disaster risk management to their investment strategies to avoid further losses.