Secretary-General Ban Ki-moon today commended the Government and people of Mozambique for steady progress in political development, but urged greater efforts to overcome human rights challenges, including discrimination and violence against women, through education and awareness-raising.

At a visit to the Samsão Muthemba secondary school, Mr. Ban highlighted his UNiTE to end violence against women and girls campaign to raise public knowledge and increase political will and resources for preventing and ending all forms of gender-based violence.

“Violence against women and girls is a global pandemic,” Mr. Ban said. “We must change attitudes and behaviour.”

Praising the role of education in the southern African country where half of all women are illiterate, Mr. Ban today announced that he had appointed President Armando Guebuza to the role of Education Champion.

“Educating girls is essential to giving them better opportunities in life,” Mr. Ban said, noting that educated girls are less likely to marry young, get pregnant before they are ready, and more likely to earn an income and success as mothers.

Last month, the UN Special Rapporteur on extreme poverty and human rights, Magdalena Sepúlveda, expressed concern about women, children and youth, older persons and persons with disabilities in the country.

She added that despite “enormous progress” to establish peace and stability, Mozambique continues to be one of the poorest countries in the world, ranking 185 out of 187 according to the 2013 UNDP Human Development Report.

Earlier today, Mr. Ban addressed the newly appointed first members of the National Human Rights Commission telling them that the country must “also make a link between rights, poverty and inequality.” In the speech, he called human rights “the bedrock of development” and pledged the UN’s continued support for good governance, justice, and anticorruption efforts.

He said he had spoken last night with representatives of the extractive industries and urged that the country’s natural wealth be managed “wisely and transparently for the benefit of all.”

“Newfound resources create new opportunities but general heightened expectations. The key is to maximize the opportunities before Mozambique and minimize the social and economic risks,” Mr. Ban told journalists.

Speaking alongside the Minister of Foreign Affairs, Oldemiro Baloi, in Maputo, Mr. Ban said Mozambique is an “important success story for the global community” of a country that can recover from conflict.

“With the peace treaty in 1992 you have been steadily moving toward greater democracy, economic and social development and political stability,” he added.

Mozambique’s post-independence 16-year civil war between the Government, led by the Liberation Front of Mozambique (FRELIMO) party, and the Mozambican National Resistance (RENAMO) ended in October 1992 with the signing of the General Peace Agreement.

More recently, Mozambique has been “instrumental” as a witness and guarantor to the Peace, Security and Cooperation Framework for the Democratic Republic of the Congo (DRC) and in the Great Lakes region.

In support of the landmark peace agreement, Mr. Ban, joined by World Bank President Jim Yong Kim, will travel next to the DRC, Rwanda and Uganda. Mr. Ban is due to meet on 26 May in Addis Ababa, Ethiopia, with the 11 signatories to the peace framework and the four guarantors who include Mr. Ban and Mr. Guebuza.

“All parties to the Framework need to comply with their commitments to bring peace to this troubled region so we in turn can bring the benefits of development to war-weary people,” Mr. Ban stressed, adding that the commitment of all parties is especially urgent now given the latest clashes in eastern DRC near Goma with the M23 rebels.

♦ Receive daily updates directly in your inbox - Subscribe here to a topic.
♦ Download the UN News app for your iOS or Android devices.
mozambique 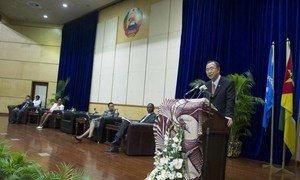