14 May 2013
Secretary-General Ban Ki-moon has welcomed the appointment of Roberto Carvalho de Azevêdo of Brazil as the next Director-General of the World Trade Organization (WTO).

Secretary-General Ban Ki-moon has welcomed the appointment of Roberto Carvalho de Azevêdo of Brazil as the next Director-General of the World Trade Organization (WTO).

Having served as Permanent Representative to the WTO, Mr. Carvalho de Azevêdo is “well placed to ensure that the WTO will continue its important work to develop an open, rule-based, predictable and non-discriminatory trading system,” Mr. Ban’s spokesperson said in a statement.

The WTO, according to its website, is the only global international organization dealing with the rules of trade between nations. At its heart are the WTO agreements, negotiated and signed by the bulk of the world’s trading nations and ratified in their parliaments. The goal is to help producers of goods and services, exporters, and importers conduct their business.

The General Council, which is the WTO’s highest-level decision-making body in Geneva that meets regularly to carry out the functions of the organization, today approved Mr. Carvalho de Azevêdo’s appointment during a special meeting.

Mr. Ban called today’s action “important and timely at this critical juncture in the world economy,” adding that he looks forward to working closely with the new WTO chief to ensure that international trade will achieve inclusive, sustained and equitable growth, help fight poverty and promote global sustainable development.

Mr. Carvalho de Azevêdo will begin his term on 1 September 2013. The current WTO Director-General, Pascal Lamy, has pledged to work closely with his successor to ensure a smooth transition.

Addressing today’s meeting of the General Council, Mr. Carvalho de Azevêdo noted that, regardless of their size, geographical circumstances, and level of development, all WTO members benefit from a predictable, rules-based multilateral trading system.

“In my term, I shall do my best to unremittingly help members in building consensus and achieving the goals set out in the Agreements establishing the World Trade Organization,” said the Brazilian ambassador, who has been working in and with the WTO for the last 15 years.

“I have seen it in much better days. I pledge to all members that I will work with them, with unwavering and steadfast determination, to restore the WTO to the role and pre-eminence it deserves and must have.” 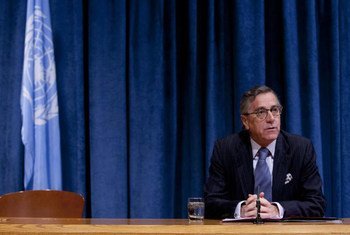 22 April 2013
Poverty reduction, trade growth and job creation require greater coordination between the United Nations and the Bretton Woods institutions, the head of the Economic and Social Council (ECOSOC) today urged at the opening of a special high-level meeting on sustainable development and the post-2015 development agenda.