The United Nations Security Council today condemned ‘in the strongest terms’ the car bombs that killed at least 46 people and injured dozens of others near a Syrian refugee base in the southeastern town of Reyhanli, in Turkey's Hatay province.

In a press statement that echoed the condemnation from Secretary-General Ban Ki-moon over the weekend, the Security Council expressed its condolences to the families of those killed in the 11 May attack and to the Government and people of Turkey.

The 15-member Council reiterated that terrorism in all its forms and manifestations constitutes one of the most serious threats to international peace and security, and that “any acts of terrorism are criminal unjustifiable, regardless of their motivation, wherever, whenever and by whomsoever committed,”

The Council stressed its determination to combat all forms of terrorism, in accordance with its responsibilities under the United Nations Charter, and urged Member States to ensure that anti-terrorism measures comply with international law, in particular international human rights, refugee and humanitarian law.

Turkish authorities have detained at least nine people in connection with the attacks, according to media reports.

In the statement, the Council urged authorities to bring to justice the perpetrators, organizers, financiers and sponsors of “these reprehensible acts of terrorism” and urged the international community to cooperate with Turkish authorities in their investigation and legal processes.

♦ Receive daily updates directly in your inbox - Subscribe here to a topic.
♦ Download the UN News app for your iOS or Android devices.
turkey|syria 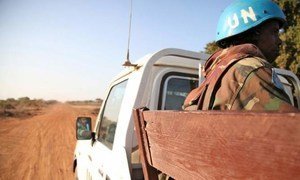 The Security Council has strongly condemned the attack on a United Nations convoy in Abyei, during which a top tribal chief and a peacekeeper from the UN Interim Security Force for Abyei (UNISFA) were killed amid growing ethnic tensions.