The crops, animals and trees found in forests can play a crucial role in improving food security and nutrition around the world, according to the United Nations Food and Agriculture Organization (FAO), which is hosting a gathering on the issue in Rome next week.

Forests cover nearly a third of the globe and provide an invaluable variety of social, economic and environmental benefits. Around 1.6 billion people – including more than 2,000 indigenous cultures – depend on forests for their livelihood.

Forests are also the source of three-fourths of freshwater, help to regulate the impact of storms and floods and store carbon from the atmosphere. Also, more than three billion people depend on forests for wood for cooking and heating.

The International Conference on Forests for Food Security and Nutrition, to be held at FAO headquarters from 13 to 15 May, will bring together policy-makers, scientists, the private sector, UN agencies, non-governmental organizations, and community and farmers' groups, as well as indigenous representatives to raise awareness and understanding about the many ways forests contribute to food security, especially in developing countries.

“If you talk to the general public about forests, they think about building houses and furniture and maybe recreation. But they don't primarily think about food,” said Eva Muller, Director of FAO's Forest Economics, Policy and Products Division.

“So one of the main reasons for organizing this conference is to draw attention to the contribution that forests can actually provide to food security and nutrition,” she stated in an interview with the UN News Centre ahead of the Rome meeting.

Ms. Muller pointed out that forests contribute to food security in a variety of ways. They are a source of 'forest foods', which include things such as fruits, leaves, seeds and mushrooms, as well as wild animals and insects.

“These usually are not the main staple of people's diets but they are a very important supplement to diets because they are very nutritious and add minerals and vitamins. Also, the insects and wild animals provide the main source of protein for many people who live in and around forests.”

Forests and trees also provide income and in many rural areas, they are the basis of small businesses, Ms. Muller noted. Very often, women collect products from the forests – mainly non-wood products – and sell them in the markets to generate crucial additional income which they use to provide food for their families, pay school fees and clothe their children.

“But forests also contribute in a more indirect ways to food security and nutrition. And that is through the environmental services they provide,” she stated. Forests help mitigate climate change by storing carbon, regulate water flows, and sometimes provide protection against the effects of storms. Forests are also home to bees which are pollinators for agricultural crops, she added.

The first day of the conference will feature the launch of the book Edible Insects: future prospects for feed and food security, which address the multi-faceted role that insects can play in nutrition and supporting livelihoods in both developing and developed countries.

Insects, Ms. Muller pointed out, are extremely nutritious. “They're rich in protein, they're rich in fat, and they're also rich in vitamins and minerals.” While edible insects may not be all the rage right now, FAO believes there is growing interest in them and that they can help address the food security needs of a growing global population.

“If we think about edible insects, there's a huge potential that has essentially not been tapped yet because currently, two billion people in the world eat insects but most of these are just collected and there's very little experience in insect farming, for example, which is something that could be explored in view of a growing population.”

The agency has been working on edible insects for a number of years and has established a database of edible insects that are reported to be used in various countries. It decided that the time was right to compile all of the information into one major publication.

“We have realized that there is really a huge potential there that hasn't been very well explored,” said Ms. Muller, who said she believes the publication will be “groundbreaking.”

In addition to highlighting the ways in which trees and forests contribute to food security and nutrition, next week's meeting will explore policy options and innovative approaches for increasing that contribution and identify key challenges and bottlenecks hindering it.

Among those expected to address the opening of the conference on Monday is FAO Director General José Graziano da Silva; David Nabarro, Special Representative of the Secretary General for Food Security and Nutrition; Mirna Cunningham, outgoing Chair of the UN Permanent Forum on Indigenous People; and Braulio De Souza Dias, Executive Secretary of the Convention on Biological Diversity. 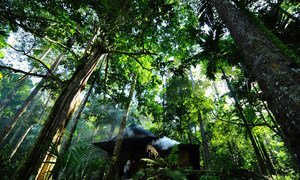 The United Nations Forum on Forests concluded its tenth session in Istanbul in the early hours of Saturday after agreeing on a series of measures to improve the sustainable management of forests, and deciding to consider setting up a voluntary global fund to support this endeavour.