10 May 2013
United Nations agencies today said they have begun distribution of emergency assistance to thousands of Syrians who were recently displaced by alleged massacres in Baniyas and its surrounding areas.

The World Food Programme (WFP) is distributing ready-to-eat food rations and high-energy biscuits to families who were forced to flee Baniyas and surrounding villages on Syria’s Mediterranean coast to Tartous city.

WFP aims to distribute supplied to more than 10,000 people – mainly women and children – in gathering points and shelters in communities such as Zamrin, Breej and Mrah, near Tartous city. Following the emergency ration, families will be given WFP’s regular food basket which includes rice, bulgur, sugar, pasta, vegetable oil and lentils.

According to the Office of the UN High Commissioner for Human Rights (OHCHR), images of piles of bloodied and burned bodies, including of small children and babies, have been emerging – allegedly taken after Government forces and militia overran al-Bayda and other parts of Baniyas last week.

WFP warned that ongoing classes on the main route between Tartous and the capital, Damascus, would significantly disrupt the movement of WFP cargo to the agency’s warehouse in the capital city. This poses a great risk as more than 60 per cent of all food stored in that warehouse – enough for one million people – arrived from Tartous Port through the Damascus-Homs highway, which was witnessing heavy fighting.

The UN Children’s Fund (UNICEF) is supplying hygiene and children’s clothing to the displaced families through the Syrian Arab Red Crescent. In a briefing to reporters in Geneva, UNICEF spokesperson Marixie Mercado said three trucks were also heading from Damascus to Tartous to distribute hygiene kits, clothing and high energy biscuits.

Ms. Mercado also drew attention an increasing number of damaged or destroyed schools in the country. According to the ministry of education, there are now over 2,960 damaged and destroyed schools out of a total of over 22,000 schools in Syria. Some 1,400 schools are being used as shelters, and 222 education staff had been killed.

She added that next week UNICEF will deliver 10 prefabricated schools to Adra in rural Damascus and one school in Damascus, the first instalment of a total of 104 pre-fabricated schools provided to meet the huge demand for safe placed to learn across the country. 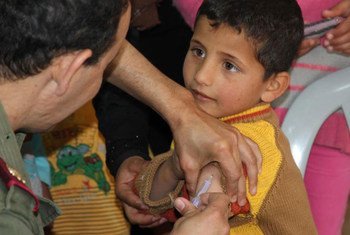 30 April 2013
The United Nations Children’s Fund (UNICEF) and partners have stepped up vaccination campaigns in Syria, Jordan, Lebanon, Iraq and Turkey amid measles outbreaks in a region already struggling to provide humanitarian assistance to millions of people affected by ongoing conflict in Syria.