OCHA
UN Trust Fund for Human Security (UNTFHS) has empowered over 500 families in Soacha, Colombia, to improve food security and nutrition in a self-sufficient manner.

8 May 2013
Recognizing that today’s interlinked, complex challenges to well-being – from civil conflicts to climate change, financial crises and health pandemics – must be met in tandem, Secretary-General Ban Ki-moon and other leaders met today to consider practical ways to advance an integrated ‘human security’ framework for that purpose.

“We meet at a time of great turmoil and transition,” Mr. Ban told participants as he opened the high-level event on human security, held at United Nations Headquarters.

“The global economy is in crisis. The environment is under threat. Too many people around the world live in uncertainty. Old conflicts simmer. New conflicts explode. Warring parties target civilians. Violence is a problem even in peaceful countries. Women and girls are especially at risk,” he stated.

“These are serious problems – but there are signs of progress,” Mr. Ban added. “I welcome growing calls by citizens around the world – especially young people – for justice, dignity and true democracy. These voices give us hope that we can transform our challenges into prospects for a better future.”

The Secretary-General said the dramatic events of recent years have provided two lessons. First, it is more important than ever to find comprehensive solutions to the world’s interlinked problems.

“You cannot end poverty without empowering women and girls. You cannot establish lasting peace without respect for human rights. You cannot increase prosperity or address climate change without transforming the world’s energy systems. We have to advance on all fronts.”

Secondly, he said, the approach must not only be comprehensive but also broad-based. “We need traditional partners, like Governments and non-governmental organizations. But we also need academics, businesses, philanthropists and others to help end poverty, promote development and establish peace,” he stated.

“The human security approach can help frame our efforts,” he said, welcoming the General Assembly’s adoption of its first-ever resolution on a common understanding of human security last September.

He added that this consensus builds on more than a decade of successful projects backed by the UN Trust Fund for Human Security (UNTFHS).

Established in 1999 and administered by the Human Security Unit, the Trust Fund supports projects to translate the human security approach into practical actions, in particular those at the field level. It has financed over 200 projects in 85 countries.

“The Fund’s projects have enabled communities around the world to make the transition towards peace and sustainable development,” said Mr. Ban. “They have succeeded because they focus on people’s needs. They draw on experts from different disciplines and different agencies. They transcend what we might think of as traditional humanitarian or development work.”

Today’s event aims to derive lessons learned from the projects that have been implemented and to mobilize support for the advancement of human security within the UN and beyond, according to a concept paper prepared by the Trust Fund.

Participants will reflect on achievements and challenges in the implementation of human security 10 years after the release of the Commission on Human Security’s report “Human Security Now.”

Sonia Picado, Chair of the Advisory Board on Human Security, will introduce the work of that entity – whose international experts guide the activities of the Trust Fund – and discuss its hopes for spurring a global initiative on human security.

Also participating in the event are Sadako Ogata, former UN High Commissioner for Refugees, President of the Japan International Cooperation Agency and co-Chair of the Commission on Human Security (CHS), and Surin Pitsuwan, former Secretary-General of the Association of Southeast Asian Nations (ASEAN), Minister of Foreign Affairs of Thailand and member of the CHS.

Deputy Secretary-General Jan Eliasson will close the event, which is also being attended by members of the Advisory Board on Human Security, individuals from academia, as well as representatives of non-governmental and civil society organizations with an interest in human security and related issues. 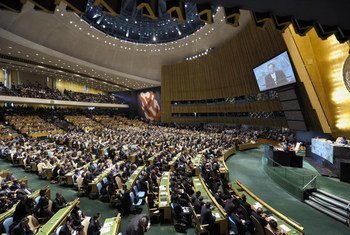 12 September 2012
Secretary-General Ban Ki-moon has welcomed the General Assembly’s adoption of a resolution on human security, describing it as “both timely and significant,” and marking “an important milestone in a common understanding of human security at the United Nations.”