3 May 2013
Laws recently passed in India to prevent and prosecute rape and other sex crimes “do not go far enough,” a United Nations independent expert said today, lamenting that the legislation failed to address systemic gender inequalities in Indian society.

Just back from a 10-say visit to India, she said that while the reforms were commendable, they did not fully reflect the recommendations in the report produced by the Verma Committee – named after former Chief Justice Jagdish Sharan Verma – which was set up in the wake of the death of a 23-year-old woman whose gang-rape in New Delhi sparked nationwide protests.

The report made a series of recommendations to tackle violence against women in India, and UN human rights officials urged the Government to follow through with them. Ms. Manjoo reiterated those calls, pressing authorities to address the multiple and intersecting inequalities and discrimination that women face.

“My mandate has consistently voiced the view that the failure in response and prevention measures stems from a Government’s inability and/or unwillingness to acknowledge and address the core structural causes of violence against women,” she said, adding: “The unfortunate reality is that the rights of many women in India continue to be violated, with impunity as the norm.”

During her visit, the independent expert met with Government authorities and civil society in New Delhi, Rajasthan, Gujarat, and Tamil Nadu, among other regions.

Independent experts or special rapporteurs are appointed by the UN Human Rights Council to examine and report back, in an unpaid capacity, on specific human rights themes. Ms. Manjoo will present her findings to the Council in June 2014. 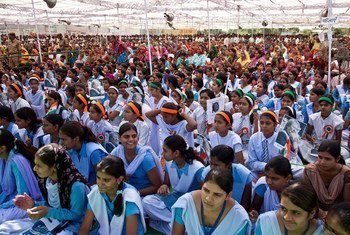 25 January 2013
A new report proposing ways to tackle violence against women in India represents a groundbreaking basis for action, the United Nations human rights chief said today, urging the Government to follow through with its recommendations.