FAO Somalia
Somali families displaced at Dhobley near the Somalia-Kenya border.
2 May 2013

More than a quarter of a million people died in the famine in Somalia between October 2010 and April 2012, in part because the international community did not act quickly enough, the top United Nations humanitarian official in the country said today.

“The suffering played out like a drama without witnesses,” said Philippe Lazzarini, UN Humanitarian Coordinator for Somalia, reacting to the findings in a new report funded and commissioned by the UN Food and Agricultural Organization (FAO).

Some 133,000 of the Somalis who perished – about half – were children under five, according to FAO’s Food Security and Nutrition Analysis Unit for Somalia (FSNAU), which carried out the study along with the USAID-funded Famine Early Warning Systems Network (FEWS NET).

Calling the magnitude of the mortality figures “unsettling”, Mr. Lazzarini said the report confirms “that we could have done more before famine was declared on 20 July 2011” and that it will help ensure “that Somalia never goes through another famine again.”

He added that “warnings that began as far back as the drought in 2010 did not trigger sufficient early action. In the worst affected areas, access to people in need was tremendously difficult.

At the peak of the crises, between May and August 2011, about 30,000 excess people died per month, according to the study.

“An estimated 4.6 per cent of the total population and 10 per cent of children under 5 died in Southern and Central Somalia,” FAO reported. “Lower Shabelle, Mogadishu, and Bay were hardest hit.”

A massive mobilization of the humanitarian community helped mitigate the worst effects of the crisis, once famine was declared, the Humanitarian Coordinator continued. “We reached previously inaccessible areas through innovative programming and by strengthening local partnerships.”

Since then, the UN community and its partners have changed the way it operates, Mr. Lazzarini said, “With 2.7 million people still in need of life-saving assistance and support to build up their livelihoods, we are redoubling efforts to invest in Somalia’s people and communities to break the cycle of crisis and response.”

“We are seeking ways to bridge humanitarian and development work which will be crucial to consolidating the resilience of Somalia’s people and communities,” he added. 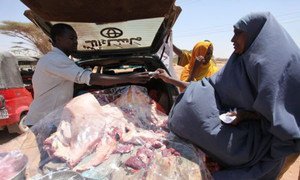