UN Photo/Eskinder Debebe
Secretary-General Ban Ki-moon (at lectern) speaks to reporters before his meeting with Åke Sellström (left), head of the UN technical mission to investigate the possible use of chemical weapons in Syria.
29 April 2013

Secretary-General Ban Ki-moon today renewed his appeal for unfettered access to Syria for the United Nations team probing the alleged use of chemical weapons during the conflict, as he met in New York with the head of the investigation.

“A credible and comprehensive inquiry requires full access to the sites where chemical weapons are alleged to have been used. I again urge the Syrian authorities to allow the investigation to proceed without delay and without any conditions,” Mr. Ban told reporters ahead of a meeting at UN Headquarters with Åke Sellström.

Mr. Sellström, a Swedish scientist, was appointed a month ago to head the fact-finding mission, which was launched following a formal request from the Syrian Government. The initial focus of the probe will be an incident involving the alleged use of chemical weapons in Kfar Dael region in Khan Al-Asal area in Aleppo governorate.

The fact-finding team has been on stand-by and is ready to deploy within 24 to 48 hours, with an advance team positioned in Cyprus.

“This is a crucial moment in our efforts to get the team on the ground to carry out its important task,” said Mr. Ban. “I take seriously the recent intelligence report of the United States about the use of chemical weapons in Syria. On-site activities are essential if the United Nations is to be able to establish the facts and clear up all the doubts surrounding this issue.”

He noted that even while waiting for Syrian consent to enter the country, Mr. Sellström and his colleagues have been doing what they can to gather and analyze available information. These activities include possible visits to relevant capitals.

Today, 29 April, is also the annual Day of Remembrance for the Victims of Chemical Warfare. “As we address these allegations, I encourage all involved to uphold their responsibilities in enabling us to properly police these heinous weapons of massive destruction,” said the Secretary-General.

In a separate message for the Day, Mr. Ban urged the international community to intensify efforts to rid the world of chemical weapons, along with all other weapons of mass destruction.

“This year’s observance is especially timely, as the spectre of chemical weapons is once again casting its ominous shadow,” he said, adding that the allegations of chemical weapons use in Syria serve as a reminder of the continuing importance of the Chemical Weapons Convention.

“The Convention is both practical and aspirational. It provides a framework for implementing chemical weapons disarmament and facilitating the peaceful uses of chemistry. It is also a highly symbolic instrument – representing a determined refusal of States Parties to allow the atrocities of the past to be repeated.”

Noting that close to 80 per cent of declared chemical warfare agents had been verifiably destroyed, Mr. Ban said this continuing progress is a testament to the effectiveness of the Convention and the work of the Organisation for the Prohibition of Chemical Weapons (OPCW).

“But, as current events attest, we must stay vigilant. The threat of chemical weapons persists, and eight States remain outside the Convention. Until the Convention is universal and the last stockpiles have been destroyed, our debt to the victims of chemical warfare will remain unpaid.”

Earlier this month, Mr. Ban appealed to the 188 States Parties to the Convention to do all in their power to bring on board the eight nations that still have not signed on – Angola, the Democratic People’s Republic of Korea, Egypt, Israel, Myanmar, Somalia, South Sudan, and Syria. 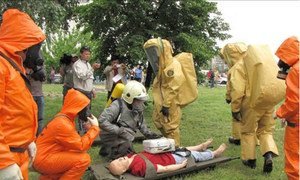 Secretary-General Ban Ki-moon has asked the head of the United Nations probe of the alleged use of chemical weapons in Syria to come to New York on Monday for consultations, a spokesperson for the world body said today.