UN Photo/Jean-Marc Ferré
Head of the UN Office for Disarmament Affairs, Angela Kane, addresses the opening of the second preparatory conference of the parties to the treaty on the Non-Proliferation of Nuclear Weapons in Geneva.

22 April 2013
Tensions over Iran’s nuclear programme and threats from the Democratic People’s Republic of Korea (DPRK) dominated today’s opening of the second preparatory conference of the parties to the United Nations-backed treaty on the Non-Proliferation of Nuclear Weapons (NPT) in Geneva.

Speaking at the start of the conference, the head of the UN Office for Disarmament Affairs (ODA), Angela Kane, urged member states to create an enabling environment that will help to address nuclear threats posed by the DPRK and Iran.

“The whole raison d’être of this review process is to focus on implementation of commitments relating to the treaty’s three pillars, nuclear disarmament, non-proliferation and peaceful uses of nuclear energy,” Ms. Kane said.

“What is most needed now in NPT arenas is to revive a sense of forward progress, however slow, however difficult it may be,” she added.

The two-week Geneva preparatory committee meeting focuses on a range of issues to prepare the agenda for the 2015 Review Conference.

The NPT, a landmark international treaty which entered into force in 1970, aims to prevent the spread of nuclear weapons and weapons technology, to promote cooperation in the peaceful uses of nuclear energy and to further the goal of achieving nuclear disarmament and general and complete disarmament.

The DPRK withdrew from the NPT in 2003, but Iran remains a signatory, one of 189 parties to the treaty.

Ahead of today’s meeting, representatives of China, France, Russia, United Kingdom and the United States, which make up the permanent membership of the UN Security Council, met in a two-day advance meeting under the rotation leadership of the Russian Federation.

In their final statement, the representatives stressed “the fundamental importance of an effective IAEA (International Atomic Energy Agency) safeguards system in preventing nuclear proliferation.” They also discussed support for the IAEA in detection of possible nuclear weapon programmes in non-nuclear weapons states.

In today’s speech, Ms. Kane said that the readiness of the nuclear-weapons States to increase the detail of their reporting on nuclear disarmament and non-proliferation activities will get increased scrutiny in the years ahead.

As a result, she said, her office has created a “place-keeper page” on its web site to serve as a future repository of data voluntarily submitted by the nuclear-weapons States.

She also welcomed the increased attention from civil society to the importance of accountability in implementation of past commitments on disarmament and non-proliferation. 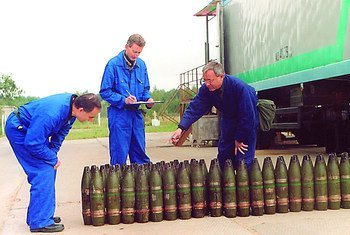 1 April 2013
The United Nations disarmament chief today urged Member States to build confidence and trust with each other by establishing and strengthening global norms on disarmament issues related to nuclear weapons and conventional arms, including by continuing negotiations on a global arms trade treaty.