The High Commissioner for Human Rights Navi Pillay described the Iraqi justice system as “too seriously flawed to warrant even a limited application of the death penalty, let alone dozens of executions at a time.”

The Government has executed 33 individuals in the past month, and the ministry of justice announced that a further 150 people may be executed in the coming days. A total of 1,400 people are believed to be currently on death row, and 129 people were executed in 2012 alone.

“Executing people in batches like this is obscene,” Ms. Pillay said. “It is like processing animals in a slaughterhouse. The criminal justice system in Iraq is still not functioning adequately, with numerous convictions based on confessions obtained under torture and ill-treatment, a weak judiciary and trial proceedings that fall short of international standards. The application of the death penalty in these circumstances is unconscionable, as any miscarriage of justice as a result of capital punishment cannot be undone.”

The Government maintains that it only executes individuals who have committed terrorist acts or other serious crimes against civilians, and have been convicted under an anti-terrorism law passed in 2005. However, Ms. Pillay expressed concern about one of the articles of the law, which broadens the scope of terrorism-related acts.

Ms. Pillay called on the Government “to halt executions, conduct a credible and independent review of all death row cases and disclose information on the number and identity of death row prisoners, the charges and judicial proceedings brought against them, and the outcome of the review of their cases.”

Prisoners convicted on terrorism-related charges are apparently unable to exercise the right to seek pardon or commutation of their sentences, as prescribed in the International Covenant on Civil and Political Rights, and Ms. Pillay noted that the presidential authority to pardon or commute death sentences is hardly ever exercised.

“I am the first to argue there must never be impunity for serious crimes. But at least if someone is jailed for life, and it is subsequently discovered there was a miscarriage of justice, he or she can be released and compensated,” she said. 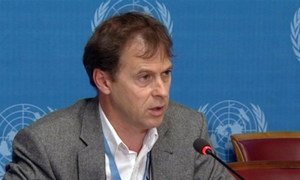 The United Nations human rights office today called on Governments to establish an official moratorium on all executions with a long term goal of abolishing the death penalty worldwide.