FAO/Jon Spaull
A scientist at a greenhouse of the Indian Agricultural Research Institute, New Delhi, doing research on a particular variety of wheat.
15 April 2013

“Climate change impacts are expected to reduce agricultural productivity, stability and incomes in many areas that already experience high levels of food insecurity. Yet world agricultural production must increase 60 percent by the middle of this century - less than 40 years from now - to keep pace with the food requirements of the world’s growing population,” said the Deputy Director-General of the Food and Agriculture Organization (FAO), Dan Gustafson at the Commission on Genetic Resources for Food and Agriculture.

According to FAO, there are as many as 30,000 edible terrestrial plant species in the world. However, only 30 crops account for 95 per cent of human food energy needs, with rice, wheat, maize, millet and sorghum amounting to 60 per cent of these.

About 75 per cent of crop genetic diversity was lost in the last century as farmers worldwide switched to genetically uniform, high-yielding varieties and abandoned multiple local varieties.

Genetic diversity is however essential to adapt and improve agriculture in the face of threats, such as diseases or warming climate that can alter growing conditions. For example, a variety of Turkish wheat, collected and stored in a seed gene bank in 1948, was rediscovered in the 1980s, when it was found to carry genes resistant to many types of disease-causing fungi. Plant breeders now use those genes to develop wheat varieties that are resistant to a range of diseases.

“Adaptation of the agriculture sector is not merely an option, but an imperative for human survival, and genetic resources will form an essential part of any adaptation strategy,” Mr. Gustafson said. “Ensuring food security in the face of climate change is among the most daunting challenges facing humankind.”

Nations in the warmest parts of the planet will be hardest hit by climate change. Arid and semi-arid zones are expected to become drier, while precipitation in other areas will be more variable and much less predictable.

The Commission on Genetic Resources for Food and Agriculture strives to ensure world food security by promoting the conservation and sustainable use of genetic resource, as well as fair and equitable sharing of the benefits arising from their use.

The Commission is the only intergovernmental body to specifically address all matters related to the world’s gene pool for food and agriculture, and is marking its 30th anniversary as it meets in Rome this week. 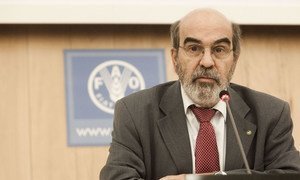 While there has been significant progress in recent years in combating global hunger, food insecurity is still a major challenge and eliminating it will require strong leadership and concerted action, a top United Nations official stressed today.