12 April 2013
The United Nations food relief agency today said it urgently needs $81 million to assist 2.5 hungry people inside Syria and one million refugees in neighbouring countries until June, and warned that without funding it would have to stop many of its current aid programmes.

“Lack of funding would mean that WFP could resort to decreasing the number of people it currently supports and would halt plans to expand and increase the number of people it plans to feed, depriving hundreds of thousands of vulnerable people in need of urgently needed food assistance,” the spokesperson for the World Food Programme (WFP) Elisabeth Byrs said in Geneva.

“With very limited alternatives to support themselves, this means refugees will face destitution or could resort to buying on credit adding a burden on their host communities,” she added.

Insufficient funds would also delay the transition from receiving food packages to food vouchers for more than 100,000 people who currently live in the Zaatari camp in Jordan.

“Food vouchers allow Syrians fleeing from conflict to choose from a variety of food items to feed their families with dignity,” Ms. Byrs said, adding that the delay would not allow people to buy fresh food and have diversity in their diet.

The vouchers also boost the host countries’ economy, and suspending the voucher programme could further strain local economies in Lebanon, Jordan, Turkey, Iraq and Egypt, where WFP injected some $12.6 million in the last month alone.

More than 70,000 people have been killed and more than three million displaced both within and outside the country since the uprising against President al-Assad began in March 2011.

Over the past ten days however, the Office for High Commissioner for Refugees (UNHCR) has seen an increase in the number of Syrians returning home from Jordan, with about 300 people are crossing the border everyday into the Syrian governorate of Daraa. This still represents less than one per cent of the total number of refugees.

“UNHCR is very concerned that refugees are returning to areas blighted by shortages of food, lack of fuel and electricity and limited services,” said UNHCR spokesperson Melissa Fleming. “The security situation is volatile, with reports of artillery shells and mortars being fired into villages refugees are trying to reclaim their homes and lives in.”

UNHCR said it is not facilitating these returns, but is counselling refugees who wish to return on the conditions they will face. The agency is also undertaking regular missions to the border and working with the Jordanian authorities to ensure that all refugees have access to their documentation should they make the decision to return to Syria.

The reasons for returning given by refugees include improved security in a number of border villages, a desire to safeguard their property, reuniting with family members who remained in Syria or travelling to collect and bring back vulnerable family members to Jordan, Ms. Fleming said. 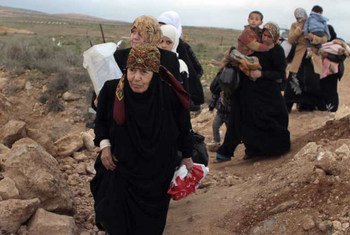 9 April 2013
With United Nations efforts to tackle the Syrian refugee crisis reaching “breaking point” due to a massive shortfall in funds, a senior official warned today that the exodus of people fleeing the conflict could balloon to four million by the end of the year absent a political solution.