2 April 2013
Revitalizing the General Assembly can help ensure that the chief deliberative and policy-making body of the United Nations becomes a true, universal “parliament of nations” where the world’s most important issues are discussed and decisions taken, its President said today.

Addressing the first meeting of the Ad Hoc Working Group on the Revitalization of the Work of the General Assembly, Vuk Jeremic said he believed this is “a conditio sine qua non for an international system that aspires to justice, and pledges not only equal rights to all nations, but aims to safeguard their equal dignity as well.”

The Assembly, which comprises representatives of all 193 Member States, is the main deliberative body of the UN and one of its six principal organs. The work of the Organization year-round derives largely from the mandates given by the Assembly. The revitalization process aims to enhance its role, authority, effectiveness and efficiency.

The discussions in the Ad Hoc Working Group are organized by Ambassador Mootaz Ahmadein Khalil of Egypt who has proposed a plan of work that is grouped into four clusters.

The first cluster is focused on the Assembly’s role and responsibilities, as well as its relationship to the other principal organs of the UN and regional organizations.

The second relates to significant technical matters, such as working methods, implementation of resolutions, and agenda streamlining, in addition to discussing options for more time-conscious and secure balloting in the plenary.

The third revolves around a consideration of the role of the Assembly in the selection of the Secretary-General, as well as other executive heads within the UN system.

The fourth cluster includes an examination of the functions of the Office of the President of the General Assembly, its relationship with the Secretariat, and ways in which the Office’s institutional memory can be enhanced. Within this context, the Group will also look at options for increasing the assignment of permanent UN staff to the Office, as well as its level of funding.

“I believe that the current apportionment is manifestly inadequate,” Mr. Jeremic said in his remarks today, maintaining that the lack of funding discourages some countries from presenting candidates for Assemble President.

“For most small- and medium-sized countries – particularly those from the developing world – this one-year position is perhaps the most important multilateral post for which they have the opportunity to run,” he noted.

In deliberating whether to present a candidature for Assembly President, no Member State should be constrained by the possible financial implications of victory, Mr. Jeremic stated.

“In my view, this constitutes an undue burden. In this institution, where each member is equal to every other, all must have an equal opportunity to exercise the duties of the PGA to the best of their ability, not their country’s capacity to finance them.

“I therefore respectively appeal to this Group to make a strong recommendation to level the fiscal playing field, by calling for a larger allocation of funds from the regular UN budget to be granted to the Office of the President.” 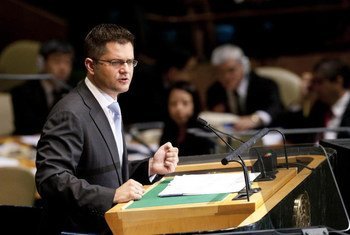 UN 'only as strong as the membership chooses to make it,' General Assembly President tells close of debate

1 October 2012
Addressing the close of the United Nations General Assembly's high-level debate today, the Assembly's President, Vuk Jeremic, underscored that “as has been the case since its founding, this Organization will only be as strong as the membership chooses to make it.”