UN Photo/Devra Berkowitz
A view of the voting panels as the UN General Assembly voted to approve a global arms trade treaty.
2 April 2013

The resolution containing the text of the treaty, which regulates the international trade in conventional arms, received 154 votes in favour. Three Member States – Democratic People’s Republic of Korea (DPRK), Iran and Syria – voted against the decision, while 23 countries abstained.

Today’s action follows the failure last Thursday of the Final UN Conference on the Arms Trade Treaty (ATT) to reach an agreement among all 193 Member States on a treaty text at the conclusion of its two-week session.

The adoption of the treaty was welcomed by several UN officials, including Secretary-General Ban Ki-moon, who hailed it as a powerful new tool in efforts to prevent grave human rights abuses, and added that it will provide much-needed momentum for other global disarmament and non-proliferation efforts.

“It is a historic diplomatic achievement – the culmination of long-held dreams and many years of effort,” he said in a statement issued after the Assembly’s action. “This is a victory for the world’s people.”

The UN Children’s Fund (UNICEF) welcomed the treaty’s adoption as a crucial step toward protecting children, as it will regulate the transfer of weapons from one country to another.

“The Arms Trade Treaty asks States to explicitly consider the risk that an arms transfer could facilitate serious acts of violence against women and children before allowing it to proceed,” Susan Bissell, UNICEF’s Chief of Child Protection, noted in a news release. “This is critical given that weapons are now one of the leading causes of death of children and adolescents in many countries, including many that are not experiencing war,” she added.

The UN Special Adviser on the Prevention of Genocide, Adama Dieng, welcomed the inclusion in the treaty of a prohibition on the transfer of arms which would be used in the commission of genocide, crimes against humanity and certain war crimes and called on States to act quickly to apply this prohibition, pending its entry into force.

“Genocide depends in part on the availability of arms and ammunition,” he said in a statement. “Despite some shortcomings of this treaty, its adoption represents an important step forward in the struggle to prevent genocide and provides a new legal tool to protect those at risk of their lives, and groups threatened with destruction.”

Speaking ahead of the vote, the President of the General Assembly, Vuk Jeremiæ, called the text “groundbreaking,” as well as “robust and actionable.”

He recalled that in 2006, Member States had pledged in the same General Assembly Hall to engage in a multilateral effort to produce a legally binding instrument, establishing common standards for the import, export and transfer of conventional arms – including warships and battle tanks, combat aircraft and attack helicopters, as well as small arms and light weapons.

“I personally believe that the final text of this conference meets those commitments to a great extent,” Mr. Jeremiæ said, adding that the lack of a regulatory framework for such activities had made a “daunting” contribution to ongoing conflicts, regional instabilities, displacement of peoples, terrorism and transnational organized crime.

The text draws a link with the presence of weapons across the developing world, especially in conflict-affected areas, with the challenge of sustainable development and safeguarding human rights, added Mr. Jeremiæ.

The President of the ATT conference, Ambassador Peter Woolcott of Australia, noted that the conference “came very close to success.” He praised all delegations for “working hard and negotiating in a constructive manner and looking for success,” adding that the different interests and perspectives in the conference room required work through complex issues.

Each version of the text built on previous ones, Mr. Woolcott said, and represented “a fair expression of negotiation, compromise between many different interests in the room, and ultimately what might command consensus at the end of the final conference.”

Once the text was rejected Thursday evening, a Member State introduced a General Assembly draft resolution that same evening, according to the Office of the President of the Assembly.

Unlike in the Conference, where all 193 Member States had to agree on the final text, the Assembly needed only a simple majority, or 97 votes, to pass the text. The treaty will enter into force 90 days after ratified by the 50th signatory.

According to the UN Office for Disarmament Affairs, the treaty will not do any of the following: interfere with domestic arms commerce or the right to bear arms in Member States; ban the export of any type of weapon; harm States' legitimate right to self-defence; or undermine national arms regulation standards already in place. 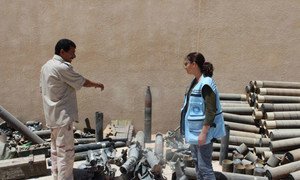 Secretary-General Ban Ki-moon today said he was deeply disappointed with the failure of the Final United Nations Conference on the Arms Trade Treaty (ATT) to reach an agreement among all 193 Member States on a treaty text during the last day of the conference.