“Now is the time to work for a more inclusive society, highlight the talents of affected people and ensure opportunities for them to realize their potential,” Mr. Ban said in his message on World Autism Awareness Day, which is marked annually on 2 April.

“International attention is essential to address stigma, lack of awareness and inadequate support structures,” he added.

Autism is characterized by varying degrees of impairment in communication skills and social interactions and in restricted, repetitive patterns of behaviour.

In her video message for the Day, Ban Soon-taek, the Secretary-General's wife, noted the UN's commitment to raising awareness about autism.

“Let us continue to work hand-in-hand with affected individuals which strengthens their lives and helps society as a whole,” Mrs. Ban said.

In New York, two panel discussions take place today to celebrate the abilities of people with autism. In addition to scholars and civil society representatives, the panels feature Neal Katz, a teenager with autism featured in the film 'Autism The Musical' Fazli Azeem, a Fulbright Scholar from Pakistan who is on the autism spectrum; and Idil Azeem from Somalia, who has a child with autism.

UN Headquarters in New York is also hosting a musical performance by Talina and The Miracle Project, which includes performers with autism, as well as a film screening.

In November, the General Assembly held a High-level Special Event on Autism and Developmental Disabilities. Member States adopted a new resolution encouraging governments to strengthen research and expand their delivery of health, education, employment and other essential services.

The resolution is also meant to help close the “awareness gap” in terms of developing countries' knowledge of autism and how to treat the illness.

Next month, Autism Spectrum Disorders (ASD) will be on the agenda for the Executive Board of the World Health Assembly, the decision-making body of the UN World Health Organization (WHO).

In addition, the General Assembly will hold a high-level meeting on 23 September to address the conditions of people with disabilities, including ASD.

“I hope leaders will seize this opportunity to make a meaningful difference that will help these individuals and our human family as a whole,” Mr. Ban said in today's message.

The General Assembly unanimously agreed in December 2007 to mark 2 April as World Autism Awareness Day to highlight the need to help improve the lives of children and adults who suffer from the condition, so they can lead full and meaningful lives.

UN chief urges empathy for those who suffer from autism 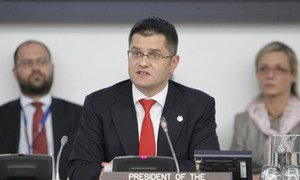 The President of the United Nations General Assembly, Vuk Jeremic, today called for more to be done to close an “awareness gap” in terms of developing countries’ knowledge of autism and how to treat the illness.