UN Photo/S. Waak
Some light and heavy weapons collected from fighters under a disarmament programme.

26 March 2013
Secretary-General Ban Ki-moon today urged participants at the United Nations Final Conference on the Arms Trade Treaty (ATT) to show a shared determination to put in place substantial measures that would establish standards for the international trade in conventional weapons.

“The negotiations now stand at a critical juncture,” Mr. Ban’s spokesperson, Martin Nesirky, told reporters in New York. “[Mr. Ban] calls upon Member States to show a shared determination to close the gaps in the poorly regulated international arms trade by agreeing to a set of legally binding global standards that will make a difference.”

Virtually all international trade in goods is regulated, but no globally agreed standards exist for the international arms trade. The result can be the misuse of transferred weaponry by government forces, or diversion of arms into illegal markets, where they end up in the hands of criminals, gangs, war lords and terrorists.

The last negotiations on the ATT ended in July of last year without agreement. Mr. Ban has described that outcome as “a disgrace,” and has stressed that reaching consensus through compromise on all sides is long overdue.

Mr. Ban “has consistently said that a strong and robust arms trade treaty will have a real impact on the lives of those millions of people suffering from the consequences of armed conflict, repression and armed violence,” Mr. Nesirky said.

Some 2,000 representatives of Governments, international and regional organizations and civil society have gathered at UN Headquarters to take part in the negotiations and related events. The process is overseen by Ambassador Peter Woolcott of Australia which holds the presidency of the conference.

Mr. Nesirky noted that there are a range of views on the scope of the treaty, regarding whether ammunition should fully be a part of it, and the criteria that arms-exporting States will need to use to determine if a particular arms export is warranted.

However, he said Mr. Ban has full confidence that Mr. Woolcott will guide the two-week conference to a positive outcome before it comes to a close on Thursday.

“The Secretary-General has been active in encouraging Member States to reach an agreement. He has been reaching out to some of the key players in this regard,” Mr. Nesirky added. 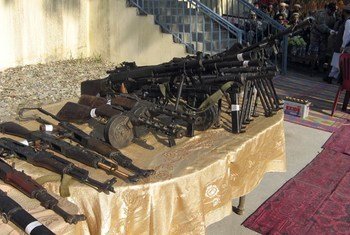 14 March 2013
Secretary-General Ban Ki-moon today reiterated his support for a comprehensive arms trade treaty ahead of next week’s United Nations conference at which representatives from 193 Member States will seek to reach agreement on this “landmark” instrument.