22 March 2013
A senior United Nations envoy warned today that ongoing tensions and incidents on the ground must not be allowed to jeopardize the political talks between Serbia and Kosovo which have resulted in important positive developments and must be permitted to achieve their potential.

“The political dialogue is now at a critical stage, and the parties are poised to make fundamental progress,” the Secretary-General’s Special Representative for Kosovo, Farid Zarif, said in a briefing to the Security Council.

“Alongside this, stability on the ground remains fragile, and is likely to continue to remain so while these talks delve into topics which are, at once, the most sensitive and the most essential,” he added.

Belgrade and Pristina have been engaged in high-level talks on a range of practical matters, facilitated by the European Union, with the most recent round held earlier this week in Brussels.

Mr. Zarif, who is also head of the UN Interim Administration Mission in Kosovo (UNMIK), reported that incidents and tensions continue to occur on the ground, underscoring the need for energy and effort to be rededicated by all the international presences, alongside the negotiations.

“Simply, it is imperative that the inevitable problems and setbacks on the ground, however difficult they may be for those affected, are not permitted to undermine the atmosphere and the potential for progress in the vital political talks,” he stated.

“Far too much is at stake to permit short-term political challenges, anxieties and setbacks to put at risk the fundamental and historic opportunity which now stands before the parties. Effective, efficient and coherent work by all international presences is needed to promote and sustain the conditions in which political talks may achieve their true potential.”

He said that progress has emerged from the high-level dialogue, which has addressed complex issues such as the management of fees and duties at crossing points. Discussions have more recently shifted to addressing the matter of Serbian institutions operating within Kosovo, as well as a range of difficult issues specific to the situation of northern Kosovo.

“It is my hope, in this respect, that the parties will remain steadfast in their determination to reach acceptable compromises on these most sensitive issues and find viable solutions which will better serve the interests and aspirations of all communities living in Kosovo,” he stated.

“Concomitant with this period of encouraging political progress, significant challenges have also been faced on the ground, including adverse security incidents, as well as frequent instances of inflammatory rhetoric and posturing from different quarters,” the envoy noted.

Mr. Zarif said that the latter have not only placed “unhelpful strains” on the atmosphere for the political process, but in some cases have also threatened efforts to ensure translation of agreements into practice.

“In the face of such developments, we have joined others in continuously urging both sides, not simply to remain committed to the dialogue, but also to more actively exert leadership to temper the emotions and reactions of their respective constituencies.”

He added that for this political engagement to achieve its maximum potential, it needs to be accompanied by strenuous, constant and coherent work on the ground, both by the mandated international presences and by local leaders.

“For our part, UNMIK continues to implement a broad-based strategic review of all our activities, and to enhance functional coordination with our international partners,” he said. “Our goal is to help ensure that the political process is reflected in – as much as it is reflective of – the realities we face daily in Kosovo.”

Secretary-General Ban Ki-moon expressed his strong support for the EU-facilitated dialogue between Belgrade and Pristina during a meeting held yesterday with Serbian Prime Minister Ivica Daèiæ, and another held today with Hashim Thaçi, representative of the Kosovo authorities, who was also present at the Council meeting.

Mr. Ban commended both on their leadership and encouraged them to remain committed to the dialogue in order to achieve forward-looking outcomes. He also stressed the importance of further progress by the Kosovo institutions in ensuring the rule of law, human rights, the protection of minorities and of cultural and religious heritage in Kosovo. 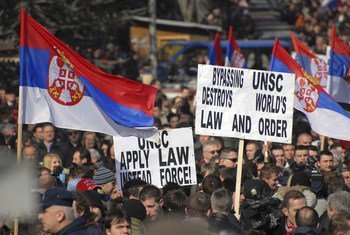 18 March 2013
Secretary-General Ban Ki-moon today stressed the importance of a successful outcome to the dialogue between Serbia and Kosovo, and called on both parties to remain committed to reaching agreements through mutually acceptable solutions.