13 March 2013
United Nations officials today lauded the commitment of Hugo Chávez to the cause of social justice, as the General Assembly paid tribute to the memory of the late President of Venezuela.

“History will remember President Chávez – a charismatic leader whose progressive policies brought Venezuela’s poverty rate down from over 70 per cent at the close of the 20th century to around 20 per cent today,” noted Assembly President Vuk Jeremic.

“Throughout his term in office, he remained committed to the cause of social justice, working hard to improve the lives of Venezuelans, especially the most underprivileged amongst them.

“Under his strong leadership, Venezuela made great strides towards fulfilling the Millennium Development Goals, to the lasting benefit of a great and proud nation,” said Mr. Jeremic, referring to the anti-poverty targets world leaders have pledged to achieve by 2015.

The Assembly President recalled Mr. Chávez’s “humble beginning” – being brought up in mud-floor house on the cattle-ranching plains of Barinas state – noting that this helped him “better understand and feel the pain and privations of ordinary Venezuelans.”

Secretary-General Ban Ki-moon praised Mr. Chávez, who died on 5 March after struggling with cancer for almost two years, as “one of those leaders who made a difference in his country, the region and the world.”

“His sense of solidarity with the most vulnerable and his commitment to improve the life of the most underprivileged resulted in a fierce attachment to the Millennium Development Goals,” said Mr. Ban. “He also showed solidarity toward other nations in the hemisphere.”

Perhaps most notably, the Secretary-General stated, Mr. Chávez ensured that Venezuela provided crucial assistance to Haiti following the devastating earthquake of 2010. “He always reminded the region of the historic debt that it owed to Haiti, the first republic to gain independence in Latin America and the Caribbean.”

Mr. Ban also recognized Mr. Chávez’s contribution to the peace talks in Colombia between the Government and the Revolutionary Armed Forces of Colombia (FARC), as well as the “decisive impetus” he provided for new efforts towards regional integration.

“As the process of regional integration progresses, the key role that President Chávez has had in promoting the unity of the peoples of Latin America and the Caribbean will be present in everyone’s minds,” said the Secretary-General.

“But perhaps President Chávez will be best remembered for his ability to connect at a human level with the most vulnerable and give voice to their aspirations,” he said. 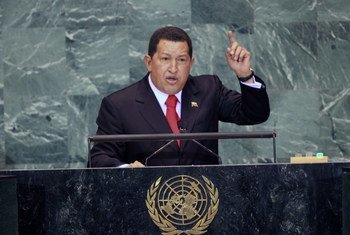 6 March 2013
Secretary-General Ban Ki-moon said he was saddened by the death of Venezuelan President Hugo Chávez, who died yesterday after struggling with cancer for almost two years.