The United Nations human rights office today welcomed a new law in Bolivia which broadens the protection of women against various forms of violence.

“We welcome the promulgation, on 9 March 2013, of the Comprehensive Law to guarantee women a life free from violence in Bolivia (Law 348), which broadens protection of women against various forms of violence and establishes the eradication of violence against women as a priority of the State,” the spokesperson for the High Commissioner for Human Rights, Rupert Colville, told journalists in Geneva.

The law also includes the crime of ‘femicide’ – in which a woman is murdered due to the fact that she is female – in the penal code, with a prison term of 30 years without pardon.

The draft was elaborated over the past three years, with the participation of the main women’s organizations and State institutions, and the technical assistance of the UN human rights office in Bolivia, Mr. Colville said.

It was approved by both chambers of the Bolivian National Congress in February and signed into law around the time of International Women’s Day, observed on 8 March.

In her Women’s Day message, the High Commissioner for Human Rights, Navi Pillay, urged authorities to adopt the necessary legal frameworks to protect women against violence, trafficking and gender-motivated killings saying the indifference towards violence against women leads to a lack of protection for the victims and lack of prosecution of perpetrators.

Lat year, Bolivian President Evo Morales and the Executive Director of the UN Entity for Gender Equality and the Empowerment of Women (UN Women), Michelle Bachelet, hosted a friendly soccer match in New York to support Bolivia’s Year to End all forms of Violence against Women and Girls. 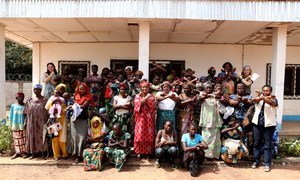