UNHCR/A. Kirchhof
A UNHCR-supported camp in northern Myanmar for people displaced by conflict in Kachin state.

11 March 2013
Ongoing reforms in Myanmar are improving the human rights situation in the country, but a large gap still remains between these efforts and their implementation on the ground, a United Nations independent expert said today.

“While the process of reform is continuing in the right direction, there are significant human rights shortcomings that remain unaddressed, such as discrimination against the Rohingya in Rakhine state and the ongoing human rights violations in relation to the conflict in Kachin state,” said the Special Rapporteur on the human rights situation in Myanmar, Tomás Ojea Quintana.

“Now is the time to address these shortcomings before they become further entrenched and destabilise the reform process.”

Several waves of clashes between ethnic Rakhine Buddhists and Rohingya Muslims have left 115,000 people displaced in Rakhine state, while some 75,000 people have fled their homes in Kachin since fighting began in June 2011 between Government troops and the Kachin Independence Organization (KIO). The fighting intensified in September and December last year, before authorities in Myanmar announced a unilateral ceasefire in January.

“The Government must establish the truth about what happened in Rakhine state during the two waves of communal violence last June and October, and hold those responsible for human rights violations to account,” Mr. Ojea Quintana said, offering his support to pursue further investigations.

Mr. Ojea Quintana also urged the Government to ease the harsh restriction on freedom of movement for the 120,000 people who remain in camps for the internally displaced in Rakhine and to begin their relocation into integrated communities before the start of the rainy season, which will flood many camps.

In Kachin, he welcomed the recent de-escalation of violence while highlighting the needs of those who have been displaced by the fighting.

“I’m particularly concerned about the situation of the 40,000 displaced in non-Government controlled areas of Kachin state, and urged the Government to provide humanitarian organizations with regular access to these areas,” he said.

In addition, the Special Rapporteur expressed concern over the rights of journalists in the country due to a draft law that threatens to undo recent progress. “This would be giving with one hand while taking away with the other.” He also noted that while people now can associate freely, protestors continue to be imprisoned and police officers are still using excessive force when managing demonstrators.

Mr. Ojea Quintana acknowledged progress in other areas, such as the release of over 800 prisoners of conscience since May 2011, but called for the immediate release of the over 250 who remain behind bars.

“I welcome the committee set up by the Government to identify remaining prisoners of conscience, and recommend that it be established as a permanent body to guard against future detentions for political reasons and to help ensure that the rights and freedoms of all those released are fully respected,” he said. 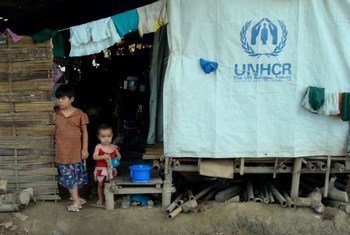 1 March 2013
United Nations and international agencies for the first time in more than a year delivered badly-needed aid to hundreds of people in northern Myanmar’s Kachin state following a cease-fire and a de-escalation of violence, while warning of poor living conditions in communal shelters.