Following its strong condemnation of the nuclear test conducted last month by the Democratic People’s Republic of Korea (DPRK), the United Nations Security Council today tightened sanctions on the country’s trade and banking, as well as travel by targeted officials.

Detailing the new sanctions through a resolution adopted unanimously by the 15-member body, the Council demanded that the country retract its announcement of withdrawal from the Nuclear Non-Proliferation Treaty (NPT) and reaffirmed its decision that “the DPRK shall abandon all nuclear weapons and existing nuclear programmes, in a complete, verifiable and irreversible manner.”

Toward that goal, an existing ban on DPRK trade in items related to the nuclear and ballistic missile programmes and officials involved in it was specified as applying to a raft of items detailed in the resolution’s annexes, ranging from “pyrotechnically actuated valves,” to luxury goods such as jewelry with pearls and race cars.

The travel ban and asset freeze was extended to additional individuals and companies, including those involved in the trade of arms-related material and to the Second Academy of Natural Sciences in Pyongyang.

Welcoming the adoption of the resolution, Secretary-General Ban Ki-moon called its measures “effective and credible,” adding that “the Security Council has sent an unequivocal message to the DPRK that the international community will not tolerate its pursuit of nuclear weapons and related acts,” according to a statement released by his spokesperson.

Mr. Ban called on DPRK and all other Member States to fully comply with the resolution, reaffirming his commitment to the denuclearization of the Korean peninsula through dialogue.

The statement noted the Secretary-General’s deep concern over heightened tension on the Korean Peninsula, and urged DPRK to refrain from any further destabilizing steps or “bellicose rhetoric.”

“At a time of new political leadership throughout the region, the Secretary-General urges Pyongyang to reverse course and build confidence with the country’s neighbours,” it stated.

Sanctions were first imposed on DPRK by the Council following nuclear tests in 2006 and 2009, including a ban on the import of nuclear and missile technology. The sanctions were further tightened in January 2013 after the country reportedly launched a long-range Unha-3 rocket from its west coast. 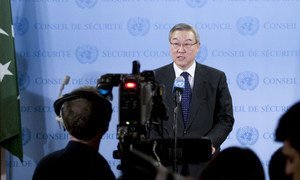 The Security Council and top United Nations officials have strongly condemned the nuclear test carried out by the Democratic People’s Republic of Korea (DPRK), warning that it constitutes a threat to international peace and security.