UNHCR/H. Caux
With the resumption of country bus services, some people have been returning home from cities like Bamako.

1 March 2013
The United Nations refugee agency today stressed that efforts to achieve reconciliation and combat impunity are needed to avoid long-term displacement in Mali, where hundreds of thousands of people have been uprooted since fighting broke out over a year ago.

The United Nations refugee agency today stressed that efforts to achieve reconciliation and combat impunity are needed to avoid long-term displacement in Mali, where hundreds of thousands of people have been uprooted since fighting broke out over a year ago.

“UNHCR believes that reconciliation efforts are urgently needed, together with efforts to combat impunity, to encourage peaceful coexistence between communities, to help long-term stabilization and security and to prevent Mali's displacement crisis from becoming more protracted,” the spokesperson for the UN High Commissioner for Refugees (UNHCR), Adrian Edwards, told reporters in Geneva.

Northern Mali was occupied by radical Islamists after fighting broke out in January 2012 between Government forces and Tuareg rebels. The conflict prompted the Malian Government to request assistance from France to stop the military advance of extremist groups.

According to UNHCR estimates, some 430,000 people have been uprooted by the crisis. Of those, more than 260,000 are internally displaced and over 170,000 have fled as refugees to neighbouring countries.

Mr. Edwards said that almost two months after the French intervention, the number of internally displaced persons (IDPs) as well as refugees is still high and in some cases continues to increase as many people fear returning to their homes even though the security situation has improved.

“For IDPs and refugees alike the primary worry remains insecurity. Continued fighting, suicide attacks, reprisal attacks against some communities, the presence of mines and unexploded ordinance in the regions of Mopti, Gao, and Timbuktu, are all cited as reasons to delay returning,” Mr. Edwards said.

“However, the absence of services in the north is also a factor: with few schools functioning there, and Government authorities still absent in many towns and cities, many displaced families prefer to wait.”

Mr. Edwards noted that for those outside Mali there is the added complication of ethnicity, as the majority of refugees are Tuareg or Arab and fear reprisal attacks against them. In particular, they fear that radical extremists might remain present in the community. For this reason, refugee numbers continue to grow.

He added that UNHCR is currently planning to support reconciliation efforts in areas of displacement and returns, as well as in refugee camps. 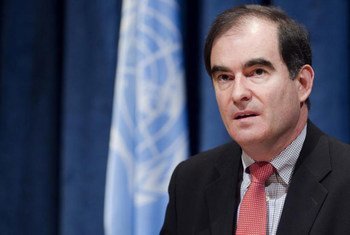 26 February 2013
After a period of brutal violence and economic collapse in Mali, access was now stable enough so that aid, if adequately funded, could help hundreds of thousands rebuild their lives, a top United Nations humanitarian official said today after a visit to the West African country.