The disparities in access to HIV/AIDS treatment across the world shed light on the need to overcome inequality and exclusion, a senior United Nations official stressed today, calling on countries to use efforts to eliminate this disease as a way to combat social injustice.

While recognizing that remarkable progress has been made in the response against the epidemic, the Executive Director of the Joint UN Programme on HIV/AIDS (UNAIDS), Michel Sidibé, said much remains to be done, especially in poor countries where many are unable to access the life-saving drugs needed for treatment.

“HIV continues to shine a harsh light on the inequalities of this world,” he told the Human Rights Council in Geneva. “It is outrageous that in 2013, when we have all the tools we need to beat this epidemic, 1.7 million people still die each year because they cannot access treatment.”

“The AIDS response has been and continues to be an instrument for attacking social injustice,” he said. “It has led us to address punitive approaches to and exclusion of the most marginalized – sex workers, people who use drugs, men who have sex with men and transgender people. They are our brothers, sisters, children and friends. They too have human rights.”

To be fully successful, the HIV/AIDS response requires countries to protect their citizens’ rights to life, health, non-discrimination and security. In the same way, development will not be able to be sustainable without acknowledging and addressing existing inequalities, Mr. Sidibé said.

He also emphasized that it is not just governments but citizens who should be active agents of change to achieve social justice by being fully aware of their rights and mobilizing around them.

“Our triumph against AIDS will inspire civil society, government and development partners to tackle other complex 21st century challenges that we share, through a participatory, inclusive and rights-based approach – the kind that works, that is sustainable,” he added. 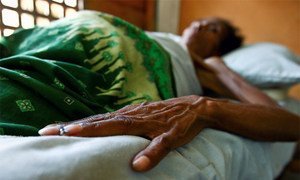 Two United Nations agencies have called for the renewal of an agreement that allows the world’s poorest countries to access life-saving drugs at costs they can afford, stressing that failing to do so would jeopardize crucial treatment for HIV/AIDS and other diseases for those who need it the most.