A senior United Nations official today called on all parties in the conflict in Syria to immediately cease all forms of sexual violence, as well as release abducted women and children.

“The people of Syria continue to suffer greatly. Civilians already caught in a vicious cycle of violence are also the target of sexual violence by all parties to the conflict,” the Special Representative of the Secretary-General on Sexual Violence in Conflict, Zainab Hawa Bangura, said in a statement.

She said that allegations of abduction and rape of women and girls in Syria by armed groups have been received. In a case yesterday, an armed group in north-west Syria allegedly hijacked a bus and abducted at least 40 civilians, mostly women and children.

“I am deeply concerned about the well-being of these women and children and would like to remind the armed group responsible for this abduction that acts of sexual violence will not be tolerated,” stated Ms. Bangura.

“The armed group must release these women and children without further delay, and must issue clear orders against sexual violence through its respective chain of command, and hold perpetrators of sexual violence to account.”

She called on all parties to the conflict to immediately cease all forms of violence, including sexual violence, and allow access to necessary medical and psychological treatment for survivors in Syria as well as in neighbouring countries.

She also reminded the Syrian authorities of their primary responsibility to prevent any acts of sexual violence against women, children and men, and to ensure accountability for such crimes.

UN officials have warned that the continued indiscriminate violence in Syria is worsening the human rights and humanitarian situations faced by civilians.

Earlier this week, Secretary-General Ban Ki-moon told a think tank in New York that “sexual violence is widespread” in the nearly two-year-old conflict between President Bashar al-Assad and the opposition, which has left more than 60,000 people, mostly civilians, dead and more than four million people in need of humanitarian assistance. 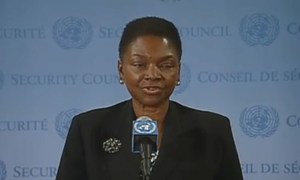 Two senior United Nations officials today stressed that the continued indiscriminate violence in Syria is worsening the human rights and humanitarian situations faced by civilians as it becomes increasingly difficult for international relief organizations to reach them.