From the besieged cities of Syria to the desert battlefields of Mali, children throughout the world continue to endure the indignities of forced conscription and suffer the resulting legacy of combat on their health and well-being, a top United Nations official warned today.

In an appeal marking the International Day against the Use of Child Soldiers, the Secretary-General’s Special Representative for Children and Armed Conflict, Leila Zerrougui, cautioned that thousands of children continue to be “abducted, recruited, killed, maimed, or raped in conflicts around the world,” including the ongoing wars in Syria and Mali.

“Children in conflict are separated from their families, are forced to kill, and experience violence and abuse,” Ms. Zerrougui stated in a joint news release issued with Catherine Ashton, the European Union’s High Representative for Foreign Affairs, adding that without serious attention to this issue, the “credibility of the international child protection system will suffer.”

While commending the progress made in fighting the scourge of child soldiers, Ms. Ashton called on Member States to join in the global effort to end forced conscription of minors.

“Many countries and armed groups have signed action plans with the United Nations to end underage recruitment which have resulted in the release and reintegration of children, as well as the prosecution of perpetrators,” Ms. Ashton stated. “I urge other parties to follow suit with immediate effect.”

According to the UN’s Office for Disarmament Affairs, 144 Member States have so far ratified the Optional Protocol to the Convention on the Rights of the Child on the involvement of children in armed conflict – a document which calls on States which ratify it to “take all feasible measures” to ensure that members of their armed forces under the age of 18 do not take a direct part in hostilities.

Nevertheless, despite the progress in winning supporters from the international community, 49 Member States have yet to ratify the Protocol.

Ms. Zerrougui, however, promised reinvigorated efforts to root out child recruitment through close collaboration between the UN and its partners.

“As a committed partner to child protection, we will continue to work hand in hand with the European Union and reach out to new regional partners in an effort to make the world a safer place for children,” she said.

The two officials also expressed hope that the sentencing of former Congolese warlord, Thomas Lubanga Dyilo, by the International Criminal Court, would further reinforce international commitment in prosecuting those guilty of child conscription.

In July 2012, Mr. Lubanga Dyilo was sentenced to 14 years of imprisonment for his involvement in recruiting children under the age of 15 into the rebel group known as Forces patriotiques pour la libération du Congo (Patriotic Forces for the Liberation of the Congo), and using them to participate actively in hostilities in Ituri district in north-eastern the Democratic Republic of the Congo (DRC) between September 2002 and August 2003.

“We hope that the landmark ruling of the International Criminal Court in the Thomas Lubanga case sent a clear signal that grave violations will not remain unpunished,” concluded Ms. Zerrougui and Ms. Ashton.

The International Day against the Use of Child Soldiers, otherwise known as Red Hand Day, is an annual commemoration of the many children around the world caught in conflict and a global call-to-action for the world’s political leaders to mobilize and end the practice of child conscription. 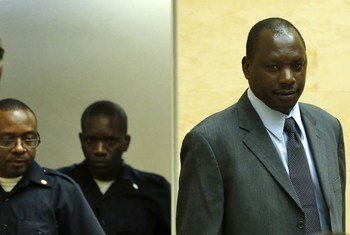