Thailand must step up its efforts to ensure all their citizens have access to water and sanitation, an independent United Nations expert said today, noting that there is currently a stark contrast between populations who are able to enjoy this basic need, and those who do not.

“The contrast between people who have access to water and sanitation in modern and formal zones in cities and those who suffer from the lack of access to these basic services and have been left behind, including informal settlements and hill tribe communities, was striking,” said the Special Rapporteur on the human right to safe drinking water and sanitation, Catarina de Albuquerque, after her eight-day visit to the country.

“While the great majority of Thai people have experienced rapid development, millions of people, including stateless people and undocumented migrant workers, have not reaped these benefits,” she said.

Ms. de Albuquerque recognized that the Government had made remarkable progress over the last decades in the areas of access to safe drinking water and sanitation, but stressed that many groups are still marginalized.

“The people who live in the shadows of Thai society suffer not only from the lack of access to water and sanitation but also from stigma and denial of dignity and privacy,” she said. “A migrant construction workers’ camp I visited only had 10 non-sex-segregated toilets and one open bathing point. They were shared by the nearly 300 workers, including 70 women, as well as by 40 children living in the camp.”

The expert also noted that there are huge disparities in access to safe drinking water and in the systematic monitoring of water quality. According to estimates by the Ministry of Public Health, the current rate of access to safe water in rural and urban areas is roughly 25 and 40 per cent, respectively. In addition, only 21 per cent of community wastewater produced daily is treated, increasing the risk of diseases.

“Rivers and other sources of water are being increasingly polluted by the discharge of untreated human waste,” Ms. de Albuquerque said. “I was shocked by the very poor management, disposal and treatment of human waste, which may be one of the major causes of the increasing diarrhoea morbidity rate in Thailand in spite of the high basic sanitation coverage that has been achieved.”

Water pollution is not just being exacerbated by untreated faecal matter being discharged directly into water systems, but also by large-scale industrial, mining and agricultural projects, which are having a severe impact in the environment and Thailand’s water resources.

“I am deeply concerned that no State entity is in charge of monitoring and ensuring the quality of water inside the household. I hence call on the Government of Thailand to establish strong accountability mechanisms to ensure full compliance by all, including the private sector, with the human rights to safe drinking water and sanitation. Proper regulation in the water and sanitation sectors is fundamental,” she said.

Independent experts, or special rapporteurs, are appointed by the UN Human Rights Council to examine and report back on a country situation or a specific human rights theme. The positions are honorary and the experts are not UN staff, nor are they paid for their work. Ms. de Albuquerque will present her report to the Council during its next session, which will include her final findings and recommendations to the Government of Thailand. 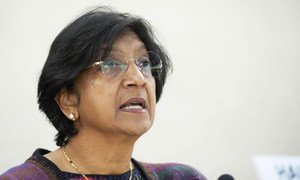 The United Nations human rights chief today condemned the harsh conviction of an editor and activist in Thailand for publishing two articles considered to be critical of the monarchy, and stressed that this puts at risk freedom of expression in the South-east Asian country.