5 February 2013
Both military and political efforts are vital if Mali’s partners are to help the country emerge from its ongoing crisis, the United Nations political chief stressed today at a conference held in Brussels to discuss the latest situation in the West African nation.

“Ultimately, the success of our support to the Malian people will depend on the effective combination of our political and security efforts,” Under-Secretary-General for Political Affairs, Jeffrey Feltman, told the meeting, which also included the participation of regional bodies such as the African Union (AU) and the Economic Community of West African States (ECOWAS).

Northern Mali has been occupied by radical Islamists after fighting broke out in January 2012 between Government forces and Tuareg rebels. The conflict uprooted thousands of people and prompted the Malian Government to request assistance from France to stop the military advance of extremist groups.

“Stabilization will be a long and difficult endeavour,” Mr. Feltman noted. “Unity of effort and purpose must guide us.”

Last month, donors pledged a reported $455 million for Mali at a conference held in the Ethiopian capital, Addis Ababa. Two trust funds were also established through which Member States can provide contributions and financial support – one for the African-led International Support Mission in Mali, known as AFISMA, and the other to support the Malian defence forces.

The success of the conference and the pledges from a wide range of donors, said Mr. Feltman, are testament to the resolve of the international community to effectively support the Malians and the region in addressing the threat.

“To secure the military gains attained so far, it is important that the pledges made at the donors’ conference swiftly materialize to enable AFISMA to become fully operational and for the Malian defence and security forces to enhance their capacities,” he stated.

“It is equally critical for AFISMA to review its concept of operations and for the Malian armed forces to rebuild its command and control structure. The pledges made by the European Union and the United Kingdom are welcome in this regard. Meanwhile, it will be equally important for the international community to accelerate preparations for the post-conflict phase of the operation.”

He said he was aware that some members of the Security Council have raised the possibility of a UN peacekeeping operation. In this regard, what is important is for the AU, ECOWAS and the UN, in close consultation with the Malians, to ensure that “our collective response is suited to deal with the situation and the requirements on the ground.”

He added that the recovery of major towns in the north of the country has opened new prospects for the political process, and welcomed the recent adoption of the Roadmap for the Transition by Mali’s National Assembly.

“It provides the basis for an inclusive dialogue towards national cohesion and reconciliation and I look forward to its implementation. The Malian authorities should also continue to make visible progress in the preparations for free, fair and transparent elections as soon as possible,” he said.

“We call upon all parties to respect international human rights and humanitarian norms and do everything possible to ensure that all allegations are investigated and that the perpetrators brought to justice,” he stated, adding that in addition to human rights training, the UN “is exploring options for the rapid deployment of a mobile team of human rights observers to start monitoring activities in accessible areas.”

Also representing the UN at the meeting was Ameerah Haq, Under-Secretary-General for Field Support; Said Djinnit, the Secretary-General’s Special Representative for West Africa; Romano Prodi, the Special Envoy for the Sahel; and David Gressly, Regional Humanitarian Coordinator for the Sahel.

Meanwhile, on the humanitarian front, the UN World Food Programme (WFP) said today it has resumed deliveries of food and nutrition products to northern Mali that had been suspended when the latest wave of fighting broke out last month.

Seven boats loaded with a total of close to 600 metric tons of commodities departed over the weekend from Mopti port to Niafunké district in the Timbuktu region. These commodities will allow provision of a monthly food ration to 34,900 beneficiaries, among which 2,970 children aged under 5 and 610 pregnant and lactating women will benefit from blanket feeding rations for the prevention of malnutrition. Another 1,960 metric tons are scheduled for departure in the coming days.

The agency added that road transportation remains blocked between Mopti and northern Mali, for both commercial and humanitarian transport, critically affecting vulnerable populations’ access to food.

“The disruption of market supplies in the north is a major concern and could further endanger populations in need, with risks of an acute food security and nutrition crisis outbreak in the coming weeks,” WFP spokesperson Elisabeth Byrs told reporters in Geneva. 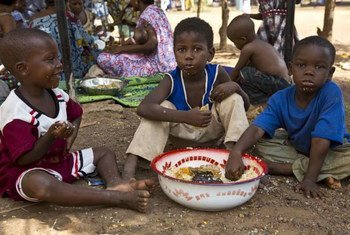 Mali: UN gears up to assist possible return of thousands of displaced people

29 January 2013
The United Nations refugee agency today announced it is urgently preparing for a possible spontaneous return of thousands of conflict-displaced people in northern Mali, where ongoing insecurity is hampering some 380,000 from returning home.