Secretary-General Ban Ki-moon today noted with “grave concern” reports of Israeli air strikes in Syria and called on all concerned to prevent an escalation of tensions in the region.

The Syrian army has reportedly said that Israeli fighter jets carried out a direct strike yesterday on a scientific research centre in Jamraya, north-west of Damascus, killing two people and wounding five.

“The Secretary-General notes with grave concern reports of Israeli air strikes in Syria. At this time, the United Nations does not have details of the reported incident. Nor is the United Nations in a position to independently verify what has occurred,” said a note issued by Mr. Ban’s office.

“The Secretary-General calls on all concerned to prevent tensions or their escalation in the region, and to strictly abide by international law, in particular in respect of territorial integrity and sovereignty of all countries in the region.”

Syrian authorities have protested to the UN Disengagement Observer Force (UNDOF), which monitors the ceasefire in the Golan Heights between Israel and Syria, that Israeli planes had flown over the area of separation.

“UNDOF did not observe any planes flying over the area of separation and therefore was not able to confirm the incident,” Eduardo Del Buey, deputy spokesperson for the Secretary-General, told reporters in New York. “UNDOF also reported bad weather conditions.”

Wednesday’s reported air strikes are the latest development in the conflict in Syria – which has already claimed more than 60,000 lives since the uprising against President Bashar al-Assad began in early 2011 and left over four million people in need of humanitarian assistance.

Also today, the Secretary-General welcomed the recent statement by the head of the opposition coalition, Moaz Al Khatib, indicating that he is willing to talk to representatives of the Government outside of Syria and under certain conditions.

Along with the Joint Special Representative of the UN and the League of Arab States for Syria, Lakhdar Brahimi, Mr. Ban has repeatedly said that the levels of suffering and destruction in Syria are already intolerable.

“They continue to appeal to all to end the violence and resolve the conflict through negotiations and a credible process that would lead to a real change, a clear break from the past, and fulfil the legitimate and democratic aspirations of the Syrian people,” Mr. Ban’s office said in a note issued to the press. 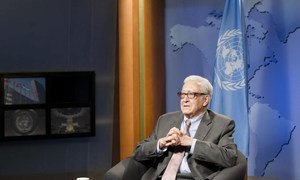 Reaffirming the importance of negotiation to stop the carnage in Syria, the Joint Special Representative of the United Nations and the League of Arab States reacted cautiously today to reports that an opposition leader was ready to hold talks with the Syrian Government.