“Today, we have seen global solidarity in action,” Secretary-General Ban Ki-moon told the pledging conference for Syria, which was held in Kuwait City. “We have brought a message of hope to the millions of Syrians who have been affected by this terrible crisis.”

The conference sought to raise $1.5 billion to assist civilians affected by the ongoing conflict over the next six months, including those taking refuge beyond Syrian borders. The amount pledged today exceeded the target, and exact figures are still being calculated.

Mr. Ban, who chaired the conference, said the UN would ensure that the funds are used effectively to meet the urgent life-saving needs of the Syrian people.

Earlier today, the Secretary-General had appealed to the international community to provide the urgently-needed funds, while also stressing the necessity of a political solution to the crisis, which cannot be solved by humanitarian aid alone.

“The situation in Syria is catastrophic and getting worse by the day,” Mr. Ban said. “And every day Syrians face a cascading catalogue of horrors: unrelenting violence, dwindling supplies of food and medicine, and human rights violations including sexual violence and arbitrary arrests and detention.”

More than 60,000 people, mostly civilians, have been killed since the uprising against President Bashar al-Assad began in early 2011. Recent months have witnessed an escalation in the conflict, which has also left more than 4 million people in need of humanitarian assistance, including 2 million who have fled their homes and are now living without basic services.

Mr. Ban stressed that the UN and humanitarian partners are doing all they can to reach as many people as possible in all areas of the country. However, resources are limited and more will be needed to continue assistance over the next six months.

“We urgently need your help,” Mr. Ban said. “I am deeply mindful of budget pressures that every Government faces today, but we cannot allow funding constraints to prevent us from bringing life-saving aid to people in desperate need. Without resources, we cannot deliver. Without resources, more people will die.”

At the same time, Mr. Ban said that humanitarian aid alone cannot solve the crisis, and called on all Syrian parties, especially the Government, to stop the violence immediately.

“The bloodshed and misery will end only when there is a political solution,” he said. “I appeal to all sides, and particularly the Syrian Government, to stop the killing. In the name of humanity: stop the violence.”

Also addressing the conference, UN Emergency Relief Coordinator Valerie Amos said that $519 million of the $1.5 billion appeal will be used for humanitarian work in ten sectors inside Syria to meet essential needs, adding that the plan is based on four priorities which consist of: providing relief supplies such as food, healthcare and water to the most vulnerable; helping people who have fled their homes and the communities hosting them; supporting reconstruction of critical infrastructure; and helping the poorest people avoid total destitution. 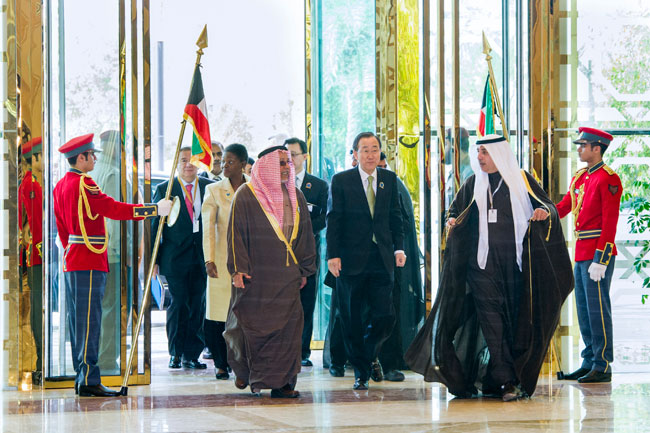 Secretary-General Ban Ki-moon in a group photo with participants at the pledging conference for Syria. UN Photo/Eskinder Debebe 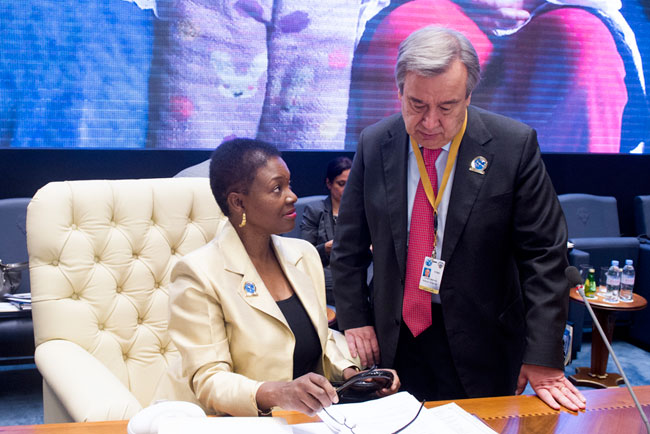 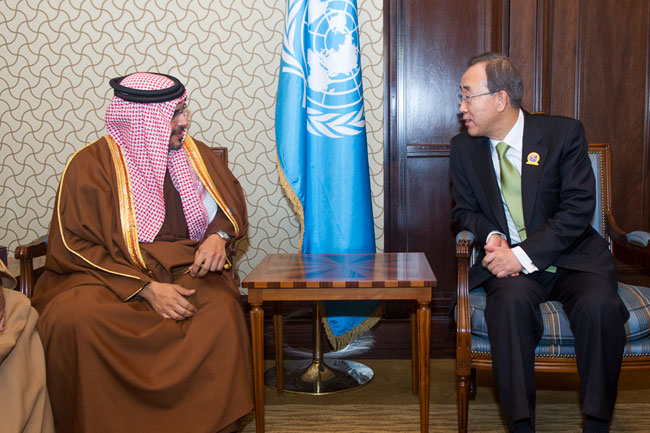 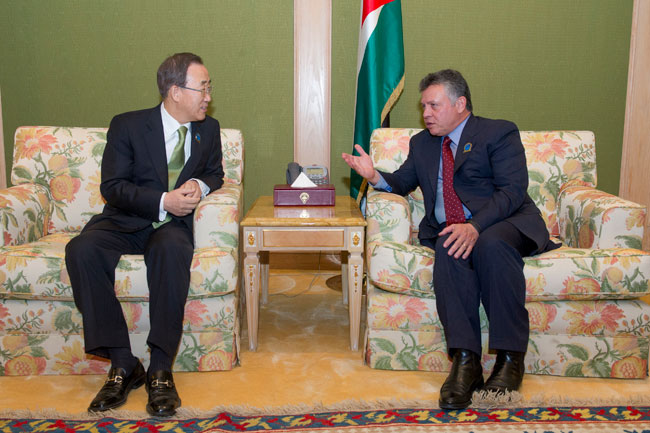 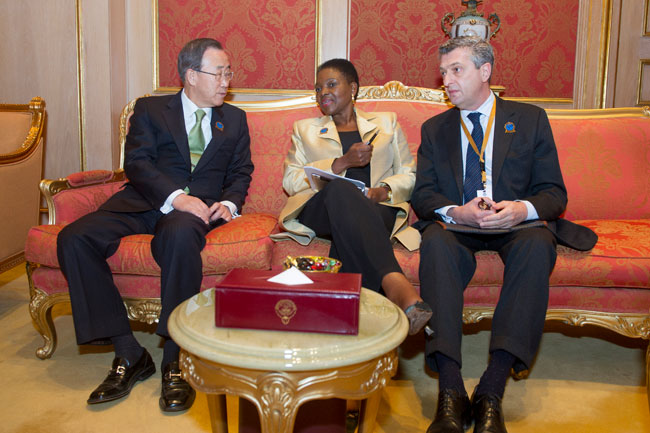 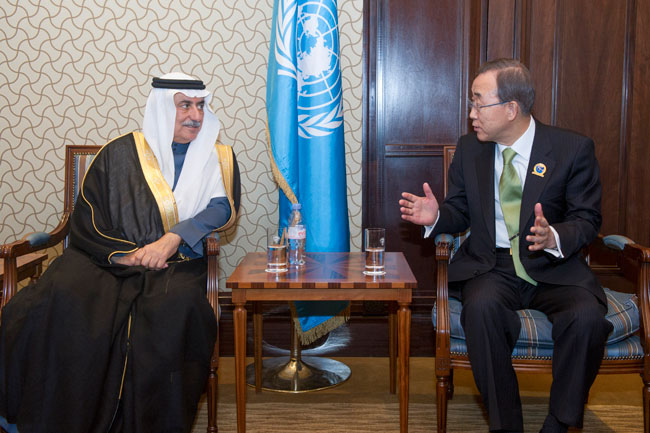 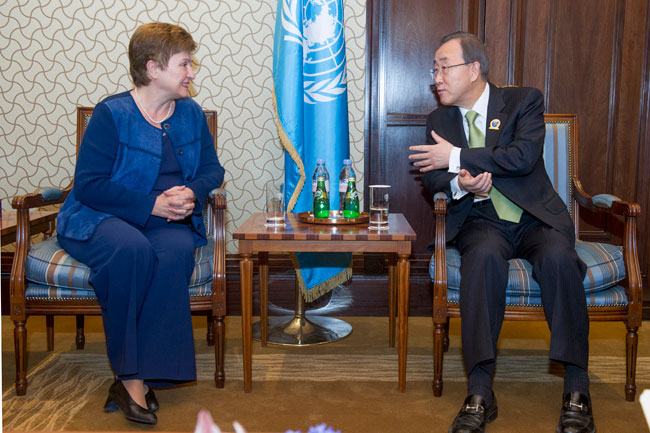 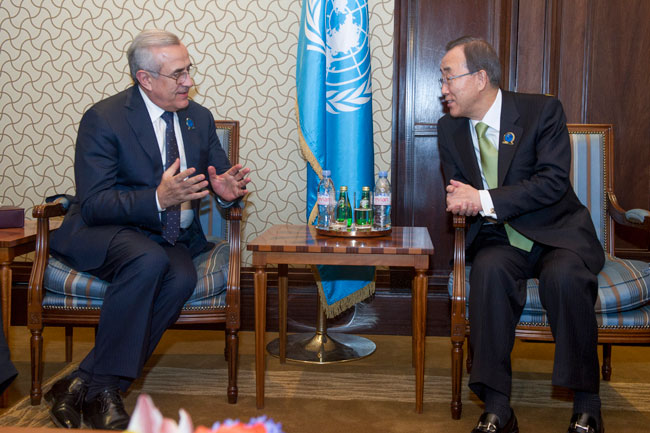 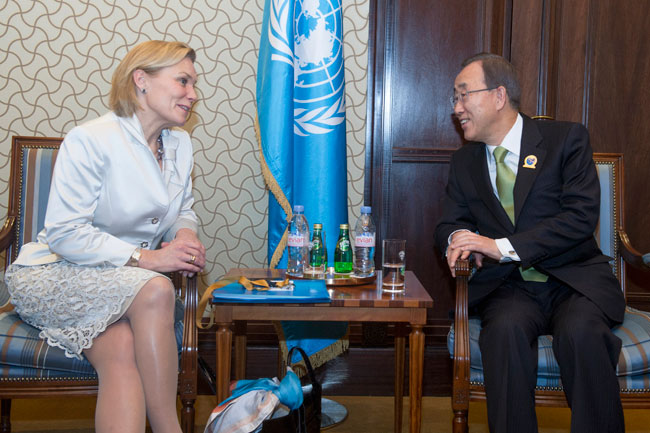 “We are watching a human tragedy unfold before our eyes. We must do all we can to stop the violence, but whilst it continues we must also do all we can to help those affected by it,” said Ms. Amos, who is also Under-Secretary-General for Humanitarian Affairs. While a large-scale aid operation is already underway in all governorates of the country, Ms. Amos said the volatility of the security situation continues to hamper response efforts, and it is still difficult to access areas controlled by the opposition as well as disputed territory.

“We need to have better access to all people requiring assistance and I call upon everyone with influence on the Government or the opposition to do all they can to facilitate that access,” she said. “Our work is guided solely by the humanitarian imperative of helping those who are in need.”

Ms. Amos, who was recently in Syria, emphasized the need for more funds as agencies move more staff and supplies to the country and its neighbours – Iraq, Jordan, Lebanon and Turkey – to improve sustain efforts carried out so far.

“We are facing a huge shortfall that could totally undermine our operations inside Syria,” she said. “The ongoing violence has shattered the lives of millions and made people fear for their lives. The collapse of the economy, rising food prices, rising unemployment and the destruction of essential infrastructure has put considerable strain on the social sector and is having an impact on the whole country. Farming is in crisis and people are now destitute and desperate.”

On the sidelines of the conference, Mr. Ban met with King Abdullah II of Jordan and expressed his appreciation for the generous support his country has provided for Syrian refugees.

The Secretary-General also met with Crown Prince Salman bin Hamad bin Issa Al Khalifa of Bahrain, and welcomed his efforts to promote an inclusive dialogue, good governance, human rights and reforms, noting that the UN is ready to assist his country in this regard.

The Joint Special Representative of the United Nations and the League of Arab States on the Syrian crisis, Lakhdar Brahimi, today called on the Security Council to take action to advance a solution to the ongoing conflict, warning against any further delay.