21 January 2013
The United Nations-African Union peacekeeping mission in Darfur (UNAMID) today reaffirmed its readiness to assist all parties, following yesterday’s announcement by the Sudanese Government and one of the rebel groups of their resumed talks to end the conflict in the region.

The United Nations-African Union peacekeeping mission in Darfur (UNAMID) today reaffirmed its readiness to assist all parties, following yesterday’s announcement by the Sudanese Government and one of the rebel groups of their resumed talks to end the conflict in the region.

“The African Union, the United Nations and other national and international actors stand ready to assist the parties, and to support successful negotiations,” said the Acting Joint Special Representative of UNAMID and Joint Chief Mediator, Aichatou Mindaoudou.

On 22 October 2012, representatives from the Government and the rebel Justice and Equality Movement (JEM) signed a declaration affirming their commitment to the peace process, the immediate cessation of hostilities and the resumption of negotiations to achieve a comprehensive conflict settlement on the basis of the so-called Doha Document for Peace in Darfur (DDPD).

Ms. Mindaoudou commended both parties for having kept their promise to return to negotiations on the basis of the DDPD and urged delegations currently meeting in the Qatari capital to seize the opportunity to reach an agreement and give peace a chance in Darfur.

The DDPD forms the basis for a permanent ceasefire and comprehensive peace agreement to end the fighting that began in Darfur nine years ago, pitting Government forces and allied militiamen against rebel groups.

JEM is the second rebel group to commit to the DDPD, after the Liberation and Justice Movement (LJM) signed it last year.

Along with the Government of Qatar, UNAMID has been heavily involved in mediation efforts in the Darfur conflict, and organized a workshop on negotiation skills for the JEM delegation earlier this month.

UNAMID is also involved in humanitarian efforts in the region. It recently delivered more than 44,000 kilogrammes of urgent aid, by land and air, to thousands of civilians who were displaced in the North Darfur villages of Saraf Omra, Kabkabya, El Sereif and Abu Gamra.

The aid, provided by the Office for the Coordination of Humanitarian Affairs (OCHA), the UN Children’s Fund (UNICEF), the UN Office for Project Services (UNOPS), and the UN High Commissioner for Refugees (UNHCR), consists of non-food items such as plastic tarps, sleeping mats, blankets and water purification equipment.

“The operation marks a significant step forward for UNAMID and its partners,” said Ms. Mindaoudou. “We have witnessed a great amount of cooperation between all stakeholders, at all levels, which has ensured that access to those in need would be granted quickly.”

The current humanitarian situation in the region emerged earlier this month as a result of clashes between the Abbala and Beni Hussein tribes over gold mines in the Jabel Amir area, resulting in more than 100 deaths and the displacement of some 70,000 people, according to Government figures. 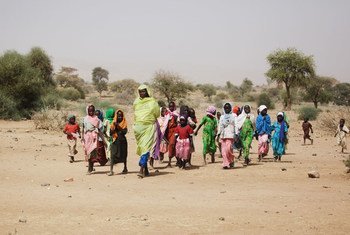 16 January 2013
Tribal clashes over the control of gold mines located in Sudan’s Darfur region have subsided but security in the area remains tense and volatile, according to the United Nations-African Union peacekeeping mission operating in the region.