The United Nations continues to follow the situation in the Central Africa Republic (CAR) with serious concern and calls on both the Government and the rebels to resolve the current crisis through dialogue, a spokesperson for the world body said today.

Following recent attacks on several towns, rebels in CAR have reportedly halted their advance on the capital, Bangui, and agreed to start peace talks. Both Secretary-General Ban Ki-moon and the Security Council had condemned the attacks and called on the rebels to halt hostilities.

They had also urged all parties to abide by the 2008 Libreville Comprehensive Peace Agreement, which was signed by the Government and the three main rebel groups and which helped bring an end to conflicts inside CAR.

“We are calling on both the Government and the rebels to focus on dialogue that can avert violence and lead to a peaceful resolution and respect for the Libreville Comprehensive Peace Agreement,” a UN spokesperson, Martin Nesirky, told reporters in New York. “We welcome regional efforts to seek a political solution and to reinforce security.”

The UN is coordinating with Margaret Vogt, the Secretary-General’s Special Representative and Head of the UN Integrated Peacebuilding Office in CAR (BINUCA), who has remained in close dialogue with the key parties and the region and has offered support to political negotiations.

Mr. Nesirky also reiterated the Security Council’s statement from last week, which calls on all parties to refrain from any acts of violence against civilians, respect human rights and seek a peaceful solution.

As a security precaution, UN international staff members have all been temporarily relocated outside the country. 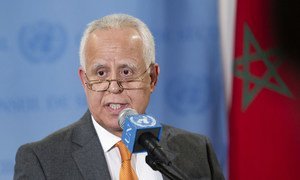 The Security Council has demanded that armed groups in the Central African Republic (CAR) immediately cease hostilities, following attacks on several towns in recent days, and called on all parties to seek a peaceful solution to the current crisis.