United Nations Secretary-General Ban Ki-moon and his envoy in Côte d'Ivoire have expressed their sorrow over a deadly stampede which took place in the early hours of the new year in the country’s biggest city, killing some 60 people.

“He offers his sincere condolences and sympathy to the families and friends of the victims, and to the Ivorian people and the Government of Côte d’Ivoire,” Mr. Ban’s spokesperson said in a statement.

“This tragic incident brought grief to the nation as citizens celebrated with joy the advent of 2013, which holds great hopes of peacebuilding, reconciliation, political and economic recovery and wellness for all,” said the Secretary-General’s Special Representative and head of the UN Operation in Côte d’Ivoire (UNOCI), Bert Koenders.

“All my thoughts are with the families and friends of the victims of this tragedy. I send them, and all Ivorians and the highest authorities of the state, my sincere condolences and deepest sympathy,” he added in a news release from UNOCI on Tuesday.

The stampede took place overnight on Monday during new year festivities in the city of Abidjan. According to media reports, around 60 people were killed and some 200 injured, many of them women and children.

Upon learning of the incident, UNOCI had sent a medical emergency team to the location, in addition to voicing its willingness to help in providing assistance to victims and with any investigation into the incident. 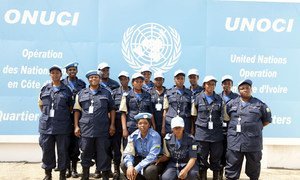 The United Nations top police official today welcomed the arrival of a contingent of female police officers to the world body’s peacekeeping missing in Côte d’Ivoire.