Concrete action to reverse or mitigate environmental damage done to the world’s oceans must be initiated immediately before it is too late, a United Nations ocean expert has warned.

Speaking at the launch of a new UN Development Programme (UNDP) report held in Washington, D.C, Andrew Hudson, the head of UNDP’s Water & Ocean Governance Programme and UN-Oceans Coordinator, noted that continuing ocean degradation threatened the livelihoods of hundreds of millions of people, primarily in the world’s least developed countries.

“Oceans are an integral part of life on earth, regulating our climate and producing oxygen for the planet, yet they are under serious threat due to pollution, over-exploitation, habitat loss, invasive species, and climate change,” Mr. Hudson told reporters. “We need to improve the way we manage the oceans, before the damage is irreversible.”

The report – entitled Catalysing Ocean Finance and co-authored with the Global Environmental Facility (GEF) – indicates how sustainable ocean management could become a legacy of today’s global leaders if ocean planning and policy instruments are scaled up.

It also illustrates the accelerating degradation of the maritime environment as a result of market and policy failures, leading to the over exploitation of fisheries, skyrocketing low-oxygen zones in coastal areas, continued introductions of destructive alien species and increased ocean acidification.

According to research undertaken by the UNDP and GEF, these same market and policy failures have led to the under-financing of ocean-friendly projects such as better wastewater treatment facilities and coastal habitat protection, ultimately eating away at resources which contribute at least $3 trillion annually in global economic output.

The report’s goal was to help both the public and private sectors create “clear incentives and policies” to protect the world’s oceans, added Dr. Naoko Ishii, the Chief Executive Officer and Chairperson of the GEF – a UN-backed entity that partners 182 countries with international institutions, civil society organizations and the private sector to address global environmental issues while supporting national sustainable development initiatives.

“It is very reassuring to learn from this report that an initial public investment on the order of $5 billion over the next 10 to 20 years could be sufficient to catalyze many hundreds of billions of dollars in public and private finance,” Dr. Ishii stated.

“We now have the right tools to identify and remove those market and policy failures which have unfortunately sped up the degradation of marine environments,” she added.

♦ Receive daily updates directly in your inbox - Subscribe here to a topic.
♦ Download the UN News app for your iOS or Android devices.
UNDP 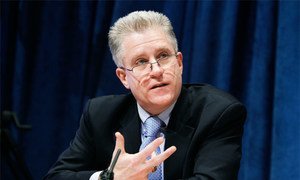