Most local government staffers have no direct access to computers, while information management systems are non-existent, according to the report, titled “City Resilience in Africa: A Ten Essentials Pilot,” and published by the UN Office for Disaster Risk Reduction (UNISDR).

The office unveiled the 64-page report in Dakar, Senegal, at the Africities Summit, where almost 5,000 delegates representing African governments and their development partners from around the world are examining the impact of urbanization, among other settlement issues.

“The report finds there is recognition of the value of disaster-risk reduction and the need to build resilience, but the means, knowledge and political commitment to do it are lacking,” the Director of UNISDR’s “Making Cities Resilient” Campaign, Helen Molina-Valdes, said in her address before the summit.

“Indigenous local knowledge is valuable, but it’s not enough on its own, especially given the challenge of climate change across Africa,” she added in reference to the way the phenomenon of global warming is said by many scientists to be causing a rising number of extreme weather events.

Ms. Molina-Valdes said the report’s findings – while based on assessments of three East African towns – were typical of the challenges faced by mid-sized centres throughout the continent.

The study looked at the Kenyan towns of Narok (pop. 60,000) and Kisumu (pop. 200,000), and the Tanzanian town of Moshi (pop. 150,000). The agency said they were selected because they had signed up to its urban-resilience campaign, which assessed them against the campaign’s “Ten Essentials” for achieving resilience.

“These three towns are not unique,” Ms. Molina-Valdes said. “Many cities and towns throughout Africa are struggling to meet basic urban infrastructural needs such as clean water, waste management disposal and drainage systems.”

She added that disaster risk reduction was “not integrated into urban planning in many local governments.”

Of the pilot towns, Narok suffers rampant poverty despite being a tourist town in Kenya’s Rift Valley; Kisumu is a major trade hub on the shores of Lake Victoria; and Moshi sits at the foot of Mt. Kilimanjaro near Tanzania’s border with Kenya, where it is susceptible to floods and drought, UNISDR said.

Indeed, floods and drought comprise the most common hazards faced by all three, according to UNISDR.

“The three local governments are not well equipped to respond to disaster events; interventions and support are limited and uncoordinated,” it said. “They are limited by funds, capacity, infrastructure and slow administrative links with regional and national authorities.”

UNISDR’s Champion for Disaster Risk Reduction in Africa, Abdou Sane, highlighted at the summit the need to mobilize political leadership.

“This remains a problem,” he said. “Strategic planning is rare at the city level, where the most vulnerable people are gathering in informal settlements, and where valuable economic assets are increasingly exposed to disaster risk.”

Mr. Sane said the report should be seen as a wake-up call for national governments to focus on how to help urban centres effectively respond to emergencies.

“This report is a very good reminder that, when we meet in these forums, we must focus on action and what works well,” he said.

“Local government leaders are on the frontline of building resilience against climate change and extreme weather events, and must be given the resources by national governments to meet the challenges.”

The summit, the sixth such event since the first in 1998, opened Tuesday, and will end Saturday.

♦ Receive daily updates directly in your inbox - Subscribe here to a topic.
♦ Download the UN News app for your iOS or Android devices.
disaster reduction 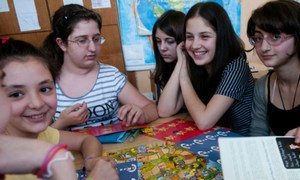 Marking the International Day for Disaster Reduction, United Nations officials have called for women and girls to be at the forefront of reducing risk and managing the world's response to natural hazards.