4 December 2012
A senior United Nations official today urged the Iranian Government to release a lawyer and human rights activist, Nasrin Sotoudeh, who has been on a hunger strike for more than 10 weeks, following reports that her health is deteriorating.

“The High Commissioner has urged the Government of Iran to promptly release Ms. Sotoudeh along with all those activists who have been arrested and detained for peacefully promoting the observance of human rights in the country,” Rupert Colville, the spokesperson for UN High Commissioner for Human Rights Navi Pillay, told a news briefing in Geneva.

“The rights to freedom of expression and opinion, and peaceful assembly are fundamental human rights which must be protected and respected,” he added.

Ms. Sotoudeh was arrested on 4 September 2010, and is currently serving a six-year sentence in Tehran’s Evin Prison, according to the Office of the UN High Commissioner for Human Rights. She was also banned from practising law for 10 years on charges linked to her work as a human rights defender.

On 17 October, she began a hunger strike to protest against her prison conditions as well as a travel ban imposed on her husband and 12-year-old daughter. Shortly after, she was put in solitary confinement and was deprived of family visits for several weeks.

Mr. Colville said High Commissioner Pillay is “extremely concerned” about Ms. Sotoudeh’s health – while Iranian authorities claim she is in a good health, her husband, who was recently allowed to visit her, says it has reached a critical stage.

“The High Commissioner urges the Government of Iran to urgently address Ms. Sotoudeh’s situation by lifting the travel ban and other sanctions on her family, which cannot be justified under international law,” Mr. Colville stated.

The spokesperson noted that UN human rights mechanisms – which include specific committees that monitor the implementation of individual conventions by States parties as well as extra-conventional mechanisms or so-called ‘Special Procedures’ such as independent experts who report in their personal capacity or as members of working groups – view the imprisonment of Ms. Sotoudeh as arbitrary, and in violation of various provisions of the Universal Declaration of Human Rights and the International Covenant on Civil and Political Rights, to which Iran is a State party.

Other activists and their families have also been imposed similar restraints, reflecting a disturbing trend to curb freedom of expression, opinion and association, Mr. Colvile said.

“The High Commissioner is concerned that family members of human rights activists and lawyers are often targeted by the Iranian authorities,” he added, pointing to the case of Massumeh Dehghan, the wife of jailed lawyer and human rights defender Abdolfattah Soltani, who in November was sentenced to one year in prison and a five-year travel ban for travelling abroad and receiving the Nuremberg International Human Rights Award given to her husband. 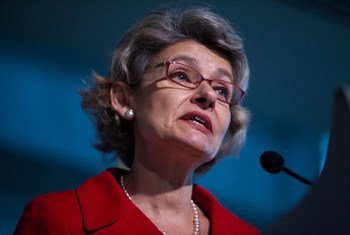 15 November 2012
The head of the United Nations agency tasked with defending press freedom and a group of UN independent experts today called for an investigation into the circumstances surrounding the death of an Iranian blogger.