UNDP Bangladesh/Nasif Ahmed
In Bangladesh, an innovative “disaster resilient village” was built in Shymnagar for a coastal village wiped out after Cyclone Aila.
3 December 2012

The top United Nations relief official today lauded the Government of Bangladesh’s efforts to enhance its disaster risk reduction, adding that the country boasted one of the most formidable disaster preparedness programmes in the world.

“This is one of the strongest examples of how preparedness saves lives. And preparedness doesn’t have to be costly,” the Under-Secretary-General for Humanitarian Affairs, Valerie Amos, said in a news release following her first visit to the Asian nation.

Ms. Amos added that with 25,000 community volunteers trained to be the first line of response after a natural disaster such as a storm or flood, Bangladesh had proven that such measures not only saves lives, but are also cost effective.

Low-lying and with the world’s highest population density, Bangladesh is one of the world’s most disaster-prone countries. According to the UN Office for the Coordination of Humanitarian Affairs (OCHA), which Ms. Amos heads, an estimated 135 million people have been affected in Bangladesh by disasters over the past 20 years.

Nevertheless, the country is also frequently hailed as a leader in disaster risk reduction due to a series of preparedness measures it adopted following a devastating cyclone which hit the country in 1991 and killed more than 140,000 people.

In 2001, when another major cyclone struck, numerous volunteers aided those affected, moving thousands of people away from the disaster area and saving many lives. In comparison with ten years earlier, the death toll from that tragedy was limited to 4,000.

However, Ms. Amos also noted that Bangladesh – situated in a geologically active area of the planet – was also overdue a severe earthquake with a potentially devastating impact on its capital city, Dhaka, where around 40 million people work and where 65 per cent of the buildings are at risk of collapse following powerful tremors.

During her visit, the UN humanitarian chief met with local Government representatives, as well as UN officials and workers from non-governmental organizations, to discuss the challenges Bangladesh still faces regarding humanitarian access and resilience-building in local communities.

In addition, OCHA confirmed the deployment of a senior advisor to help the Government, UN and local partners in Bangladesh to strengthen support on disaster management.

The visit to Bangladesh is one part of a three-country visit to the region, which includes Myanmar and Thailand. In Myanmar, Ms. Amos is expected to visit Rakhine state – the location of recent inter-communal violence – and highlight humanitarian concerns in the country, as well as discuss with authorities concrete steps to address the challenges and moves towards reconciliation and stability.

♦ Receive daily updates directly in your inbox - Subscribe here to a topic.
♦ Download the UN News app for your iOS or Android devices.
disaster reduction 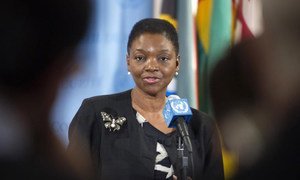 On visit to Benin, UN humanitarian chief calls for more to help people deal with floods

The United Nations humanitarian chief has called for a change in the way the international community deals with humanitarian crises and supports governments in improving preparedness and increasing the capacities and coping mechanisms of communities and households faced with floods.