“We are looking at how we can adjust our methods of work so that we continue to reach as many people in need as we can throughout the country,” the Regional Humanitarian Coordinator for Syria, Radhouane Nouicer, said in a news release from the UN Office for the Coordination of Humanitarian Affairs (OCHA).

“To that end, we are currently reviewing our contingency plans, as well as updating the Syria Humanitarian Assistance Response Plan,” he added. “Most of all, we need an end to the unrelenting violence. All calls, from all sides, for parties to honour their obligations to protect civilians in Syria have had little effect, and ordinary people are paying the price.”

The Response Plan seeks $348 million to cover humanitarian relief activities inside Syria, but has so far received $157 million.

The Middle Eastern nation has been wracked by violence, with at least 20,000 people, mostly civilians, killed since the uprising against President Bashar al-Assad began some 21 months ago. The violence has spawned more than 465,000 refugees, while more than 2.5 million people are in need of humanitarian assistance, according to UN estimates.

The increasing insecurity has made it more difficult for humanitarian agencies to operate and the continued insecurity has increased the risks faced by those inside the country as well as those who are trying to leave, OCHA noted.

The number of internally displaced people has surpassed 1.2 million, with some four million in and around the country having been affected by the crisis. Those who have left the country cite generalized violence, targeted threats against individuals and their families, and a breakdown of basic services as the reasons they fled their country.

A recent mission by the Office of the UN High Commissioner for Refugees (UNHCR) to the city of Homs in the western part of the country found dire conditions, with displaced people staying in inadequate shelters and lacking health care. The onset of winter is also a main concern for humanitarian agencies, as temperatures are expected to drop close to freezing this month.

In addition, ordinary people, but especially children, are now facing a growing threat from unexploded ordnance and explosive remnants of war, OCHA warned.

“Despite difficult circumstances, the UN and its partners have made real achievements in Syria, reaching 1.5 million people with food on a monthly basis and distributing more than 300,000 family sets with essential relief items,” Mr. Nouicer said. “While this is still not enough, we need to keep up the momentum, on behalf of all Syrians in need.” 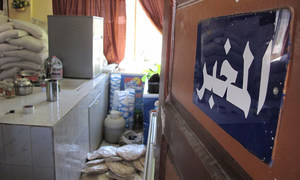