UN Photo/Rick Bajornas
A wide view of the Security Council as members unanimously adopted a resolution demanding the immediate withdrawal of the M23 rebel group from the city of Goma in the DRC.
21 November 2012

The Security Council has strongly condemned the latest wave of attacks by the 23 March Movement (M23) rebel group and demanded its immediate withdrawal from Goma, a provincial capital in eastern Democratic Republic of the Congo (DRC), that was overrun yesterday.

The Security Council has strongly condemned the latest wave of attacks by the 23 March Movement (M23) rebel group and demanded its immediate withdrawal from Goma, a provincial capital in eastern Democratic Republic of the Congo (DRC), that was overrun yesterday.

In a resolution adopted unanimously last night, the 15-member body also demanded “the cessation of any further advances by the M23 and that its members immediately and permanently disband and lay down their arms…”

The M23 – composed of soldiers who mutinied from the DRC national army in April – launched new attacks over the weekend in North Kivu province, uprooting some 60,0000 civilians and prompting the UN Organization Stabilization Mission in the DRC (MONUSCO) to deploy attack helicopters in aid of the national army, known by the French acronym FARDC.

Eastern DRC has been hit this year by massive humanitarian needs triggered by the rise of the M23 and violence by more than two dozen other armed groups across the region, with widespread abuses against civilians including murder, rape and brutal reprisals.

The Council “strongly condemns the M23 and all its attacks on the civilian population, MONUSCO peacekeepers and humanitarian actors, as well as its abuses of human rights, including summary executions, sexual and gender-based violence and large scale recruitment and use of child soldiers,” it stated in the resolution.

Briefing the Council today via video-link from DRC, the Secretary-General’s Special Representative and head of MONUSCO, Roger Meece, said that currently the M23 effectively occupies a significant portion of North Kivu, and it has been setting up a formal administrative or governing structure.

“We have received numerous reports of targeted summary executions of those who stand in their way, including government and traditional leaders who resist or fail to cooperate with an M23 administrative structure,” he stated. “We also continue to receive ongoing reports of widespread recruitment and use of children, unconfirmed cases of sexual violence, and other serious human rights abuses.”

Mr. Meece added that the rebels have not achieved full support by any ethnic group or community. “Indeed, the M23 does not enjoy broad support in North Kivu, or elsewhere in eastern DRC.”

There have been various allegations of external support to the M23. On this matter, the envoy noted that the rebels are “well provisioned, and well supplied with uniforms, and a variety of arms and munitions, many of which clearly have not come from existing FARDC stocks.

“They exhibit many characteristics of a strong, disciplined, established military force with sophisticated tactics and operations, including night operations, which are not characteristic of traditional performance,” he said.

MONUSCO, he noted, does not have the mandate or means to investigate or verify the sources or means by which these “impressive” capabilities have been achieved. “We can and have reported our encounters with English-speaking officers, surprising weaponry and equipment being used, and other signs of external support,” he added.

The Council, in the resolution, expressed deep concern at reports indicating that external support continues to be provided to the M23, including through troop reinforcement, tactical advice and the supply of equipment, causing a significant increase of the military abilities of the M23. It demanded that “any and all outside support to the M23 cease immediately.”

It requested Secretary-General Ban Ki-moon to report in the coming days, in coordination with the International Conference on the Great Lakes Region and the African Union, on the allegations of external support to the M23 and expressed its readiness to take “further appropriate measures” on the basis of this report.

It also expressed its intention to consider additional targeted sanctions against the leadership of the M23 and those providing external support to it and those acting in violation of the sanctions regime and the arms embargo imposed by the Council in relation to the DRC.

The Council requested the Secretary-General to report in the coming days on options for the possible redeployments of MONUSCO contingents and additional force multipliers, observation capabilities and troops that could improve the Mission’s ability to carry out its mandate, including to protect civilians and report on flows of arms and related materiel across the borders of eastern DRC.

MONUSCO, with 19,000 uniformed personnel, is the latest iteration of UN peacekeeping missions that have helped to bring stability and civilian elections to the vast nation after it was torn apart by civil wars and rebel movements. 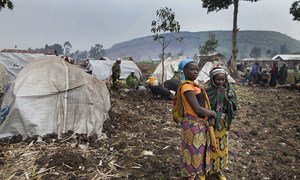 Rebel fighters with the 23 March Movement (M23) have entered the city of Goma, a provincial capital in the eastern Democratic Republic of the Congo (DRC), which has suffered mass upheaval over recent days due to the advance of the rebels and their clashes with national army troops, according to a UN spokesperson.