Marking World Toilet Day today, the United Nations independent expert on the right to clean water for drinking and personal hygiene said the international community's Millennium Development Goals (MDGs) to sharply reduce world poverty by 2015 are set to fail the poor in terms of sanitation.

Marking World Toilet Day today, the United Nations independent expert on the right to clean water for drinking and personal hygiene said the international community’s Millennium Development Goals (MDGs) to sharply reduce world poverty by 2015 are set to fail the poor in terms of sanitation.

“Access to sanitation currently ranks as the most-off track of the Millennium Goals, and one that will obviously not be met by 2015,” the UN Special Rapporteur on the human right to safe drinking water and sanitation, Catarina de Albuquerque, said according to a press release from the Office of the UN High Commissioner for Human Rights (OHCHR).

“Those who do not have access to adequate sanitation are overwhelmingly people living in poverty, and marginalised and excluded individuals and groups,” she added.

World Toilet Day is observed annually on 19 November. The international day of action aims to break the taboo around toilets and draw attention to the global sanitation challenge.

In her comments, Ms. de Albuquerque recounted that 7,500 people die daily due to a lack of sanitation, including 5,000 children under five years of age. Annually, she said, 272 million schooldays are missed due to water-borne or sanitation-related diseases.

“Access to sanitation facilities around the world, more than any other service, provides a window into the vast difference between the ‘haves’ and the ‘have-nots,’” Ms. de Albuquerque noted.

All the world’s countries and leading development institutions agreed in 2000 to set eight overall development goals – the MDGs – for achievement by 2015. Each MDG listed specific targets, including one under ‘Environmental Sustainability’ to halve the proportion of the population “without sustainable access to safe drinking water and basic sanitation.”

Current MDG figures show that more than one in three people do not have access to “improved sanitation facilities,” according to Ms. de Albuquerque.

In her latest report to the UN General Assembly, she asked for a post-2015 development agenda that aims at eliminating discrimination and inequalities in access to water and sanitation.

“The post-2015 development agenda should incorporate a stand-alone goal on water, sanitation and hygiene, to ensure that universal access to these services will be treated as a vital feature of social and economic development, on equal footing with health or education,” the report stated in a reference to MDGs on child and maternal health, and universal education. “Water, sanitation and hygiene should not be neglected in the global priority-setting for development goals.”

OHCHR characterizes the agenda Ms. de Albuquerque seeks as one that “strives to ensure access to adequate sanitation for all, prioritising available resources and devising new policies to address the needs of those individuals and groups who are currently excluded.”

According to the Special Rapporteur, safe, sustainable and affordable access to a toilet is essential for the well-being and rights of every human being.

She added, “Lack of sanitation will keep these same people sick, away from school and work, victims of violence when trying to find a place to hide to ‘do their business,’ and not able to break the cycle of poverty and exclusion, in which they are trapped.”

Ms. de Albuquerque said that one of the most critical challenges is the high number of people still practicing open defecation – more than one billion, producing enough faeces to fill a football stadium every day.

“Try to imagine yourself without toilets – no toilet in your workplace and no toilet at home,” she said, adding that the “insecurity and indignity” of having to find a secluded spot each time the need arises is especially acute for women.

Ms. de Albuquerque also called for reflection on the way the smell of excrement lingers in urban areas that are too poor to build and maintain a proper sewer system.

“This is the situation billions of people face today – especially those who are most marginalized,” she said. “Giving these people sanitation and hygiene will be a fundamental step to allow them to aspire to a better live. It is about a toilet, of all places.”

Independent experts, or special rapporteurs like Ms. de Albuquerque, are appointed by the Geneva-based UN Human Rights Council to examine and report back, in an unpaid capacity, on specific human rights themes. 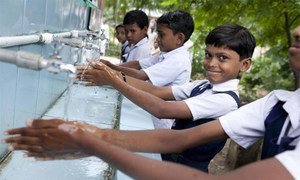 Encouraging good handwashing habits among children can act as a ‘do-it-yourself’ vaccine against diarrhoeal disease, preventing more deaths and illness than any other medical intervention, the United Nations said today, urging governments to give it the priority it deserves.