OCHA/Imane Cherif
Thousands of people have been displaced by fighting in North Kivu, Democratic Republic of the Congo.

18 November 2012
United Nations peacekeepers in the Democratic Republic of the Congo (DRC) today continued to assist the national army to halt the advance of the M23, while Secretary-General Ban Ki-moon called on the rebel group to immediately cease its attacks.

The M23 – composed of soldiers who mutinied from the DRC national army (FARDC) in April – resumed their attacks in North Kivu province early Saturday morning, uprooting thousands of civilians and prompting the UN peacekeeping mission (MONUSCO) to deploy attack helicopters to aid the efforts of the national army.

The situation deteriorated further overnight, and M23 attacks have continued throughout Sunday near the provincial capital of Goma, according to the UN Department of Peacekeeping Operations (DPKO). The rebels are in the general area of Munigi, which is close to the Goma airport.

“The Secretary-General strongly condemns the resumption of hostilities by the M23,” his spokesperson said in a statement. “He calls on the M23 to immediately cease its attacks and any further military advances toward the city of Goma in North Kivu.

“The Secretary-General calls on all relevant States to use their influence on the M23 to bring about an immediate end to the attacks,” the statement added.

Mr. Ban also underlined that MONUSCO will remain present in Goma and will continue all efforts to “robustly implement its mandate to the fullest of its capabilities” with regard to the protection of civilians.

“The situation in Goma is extremely tense,” said Mr. Dwyer. “There is a real threat that the city could fall into the M23's hands and/or be seriously destabilized as a result of the fighting.”

The latest fighting prompted an emergency meeting yesterday of the Security Council, which strongly condemned the resumption of M23 attacks and demanded their immediate cessation.

“It is imperative for the M23 to heed the demand of the Security Council to immediately cease any further advance toward Goma,” said Mr. Dwyer, who noted that the humanitarian situation in the region is deteriorating.

Humanitarian partners are reporting that at least 60,000 internally displaced persons (IDPs) at the Kanyaruchina camp and the surrounding area are on the move and many are fleeing toward Goma.

“We strongly condemn the continued violations of international humanitarian and human rights law by the M23,” Mr. Dwyer stated. “The leaders of the M23 must and will be held accountable for their actions.”

There are more than 1.6 million IDPs in North and South Kivu as a result of fighting between the national army and rebel groups in the region. They are part of the 2.4 million IDPs in the country as a whole. 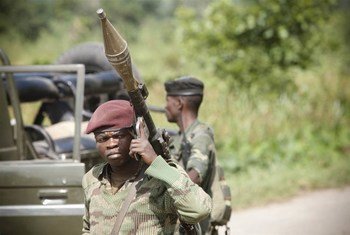 17 November 2012
The Security Council, meeting in an emergency session on Saturday, strongly condemned the latest attacks by the M23 rebel group, which displaced more civilians in eastern Democratic Republic of the Congo (DRC) and prompted the United Nations peacekeeping force there to deploy attack helicopters to support the national army.