OCHA/Gemma Connell
Internally displaced people in Myanmar sheltering in Shwe Zayti monastery, Sittwe, after being dislodged from their homes in Rakhine.

16 November 2012
United Nations Secretary-General Ban Ki-moon has welcomed moves by Myanmar’s leadership to address the violence taking place in the southeast Asian country’s Rakhine state as “steps in the right direction,” according to his spokesperson today.

The spokesperson noted that the UN chief received a letter on Friday from the President of Myanmar, U Thein Sein, in which he condemned the “criminal acts” of elements inside his country that caused the “senseless violence” that resulted in widespread loss of life, destruction of property and displacement of families in Rakhine state, located in western Myanmar.

In the letter, the President promised to deal with the perpetrators in accordance with the rule of law.

The violence reportedly left at least a dozen civilians dead and hundreds of homes destroyed, while internally displacing some 75,000 people.

Since then, at least 89 people have been killed and 35,000 displaced in the wake of a renewed upsurge in violence, beginning in late September, which also left more than 5,300 houses and religious buildings destroyed, according to UN estimates.

In President Sein’s letter, according to the UN spokesperson, he also noted that “once emotions subside on all sides,” his Government was prepared to “address contentious political dimensions, ranging from resettlement of displaced populations to granting of citizenship,” as well as to look at “issues of birth registration, work permits and permits for movement across the country for all, in line with a uniform national practice across the country ensuring that they are in keeping with accepted international norms.”

In addition, the President underlined the commitment of the Myanmar Government to meet the humanitarian needs of individuals and communities in the affected areas of Rakhine state and sought wider international assistance and cooperation in this regard.

According to the UN World Food Programme (WFP), more than 27,000 people in the townships affected by the state’s inter-communal violence have received humanitarian assistance; however, it estimates that a total of $11 million will be required to cover the food needs for all 110,000 displaced people for the next six months.

Separately, President Sein met today with senior members of the state’s Buddhist and Muslim communities, including members of the clergy, the spokesperson noted, adding that the President strongly called upon these leaders to exert maximum effort to foster harmony and cooperation between the communities.

“The Secretary-General welcomes both President U Thein Sein’s letter as well as his recent meeting as positive steps in the right direction,” the spokesperson said. “He further welcomes the assurances conveyed on behalf of the Government of Myanmar, in respect of the immediate and longer term issues connected with the troubles in Rakhine that would be carefully noted by the international community.”

The spokesperson added that the United Nations will work closely with the Government and people of Myanmar to help the affected people in Rakhine state, “as well as support the measures that will need to be taken to comprehensively address the issues at the heart of the situation there.” 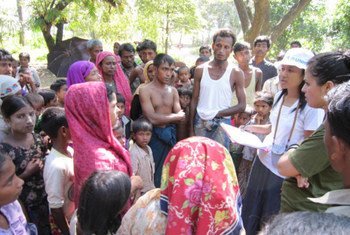 13 November 2012
The United Nations refugee agency today called on governments in Southeast Asia to keep their borders open to people fleeing Myanmar by sea, following reports of boats sinking in the Bay of Bengal earlier this month.