Secretary-General ‘extremely concerned’ over violence in Gaza and Israel, plans visit to region

United Nations Secretary-General Ban Ki-moon is “extremely concerned” about the continued violence in Gaza and Israel and deeply worried by the rising cost in terms of civilian lives, his spokesperson said today.

United Nations Secretary-General Ban Ki-moon is “extremely concerned” about the continued violence in Gaza and Israel and deeply worried by the rising cost in terms of civilian lives, his spokesperson said today.

“He urgently appeals to all concerned to do everything under their command to stop this dangerous escalation and restore calm,” the spokesperson told a news briefing at UN Headquarters in New York.

“Rocket attacks are unacceptable and must stop at once. Israel must exercise maximum restraint,” he added.

The new wave of violence in Gaza and Israel – which includes rocket attacks against Israel from Gaza, and Israeli airstrikes on Gaza – has resulted in several people being killed or wounded on both sides.

The UN chief’s spokesperson said Mr. Ban’s paramount concern is for the safety and well being of all civilians.

“All sides must respect their obligations under international humanitarian law in this regard,” he said. “A new cycle of bloodshed will make neither Israelis nor Palestinians more secure. Nor will bloodshed open the door to negotiations that could achieve the two-state solution necessary to end such violence permanently.”

The spokesperson noted that Secretary-General Ban has continued to speak with international and regional leaders and officials by telephone and in person as part of his efforts to call for restraint and push for an end to violence.

As part of those efforts, he plans to visit the region shortly.

Earlier this week, Mr. Ban spoke by telephone with Israeli Prime Minister Benjamin Netanyahu and Egyptian President Mohamed Morsy about the escalating violence, while the Security Council met in a closed, late-night session on the situation. 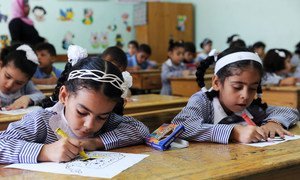 The United Nations agency assisting Palestinian refugees today voiced its deep concern over the escalation of violence in Gaza, noting that it puts civilians there and in Israel at risk.